Home » Department of Music » Guitar Study at APSU
In this section 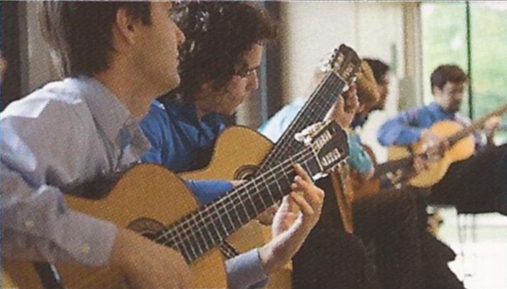 Featured in Teaching Guitar Magazine, the APSU Guitar Program has an established record of student achievement. Our students and alumni have been prize-winners at major performance competitions, have gone on to obtain graduate assistantships and doctoral teaching fellowships at major graduate programs throughout the country, and have obtained teaching positions at numerous schools, colleges, and universities.

Guitar study at APSU focuses on classical (fingerstyle) technique with students studying and performing music across the full range of classical styles in addition to contemporary ones, as soloists as well in collaboration with other guitarists, instrumentalists, and singers.

Guitar majors also have the opportunity to interact with our many nationally and internationally-renowned visiting artists. Sponsored by APSU’s Center of Excellence for the Creative Arts, our Concert Artists Series and APSU GuitarFest bring concert guitarists to campus each year for performances, masterclasses, and workshops.

We are proud of the outstanding and varied accomplishments of our guitar alumni. During their time at APSU guitar majors have won top-prizes in regional and national performance competitions (as well as regularly receiving departmental awards and honors here at APSU); have gone on to receive graduate assistantships and doctoral teaching fellowships at numerous graduate schools throughout the US; have established successful guitar teaching academies and obtained teaching positions at numerous schools and colleges throughout the region; and continue to perform and record in a wide range of settings.