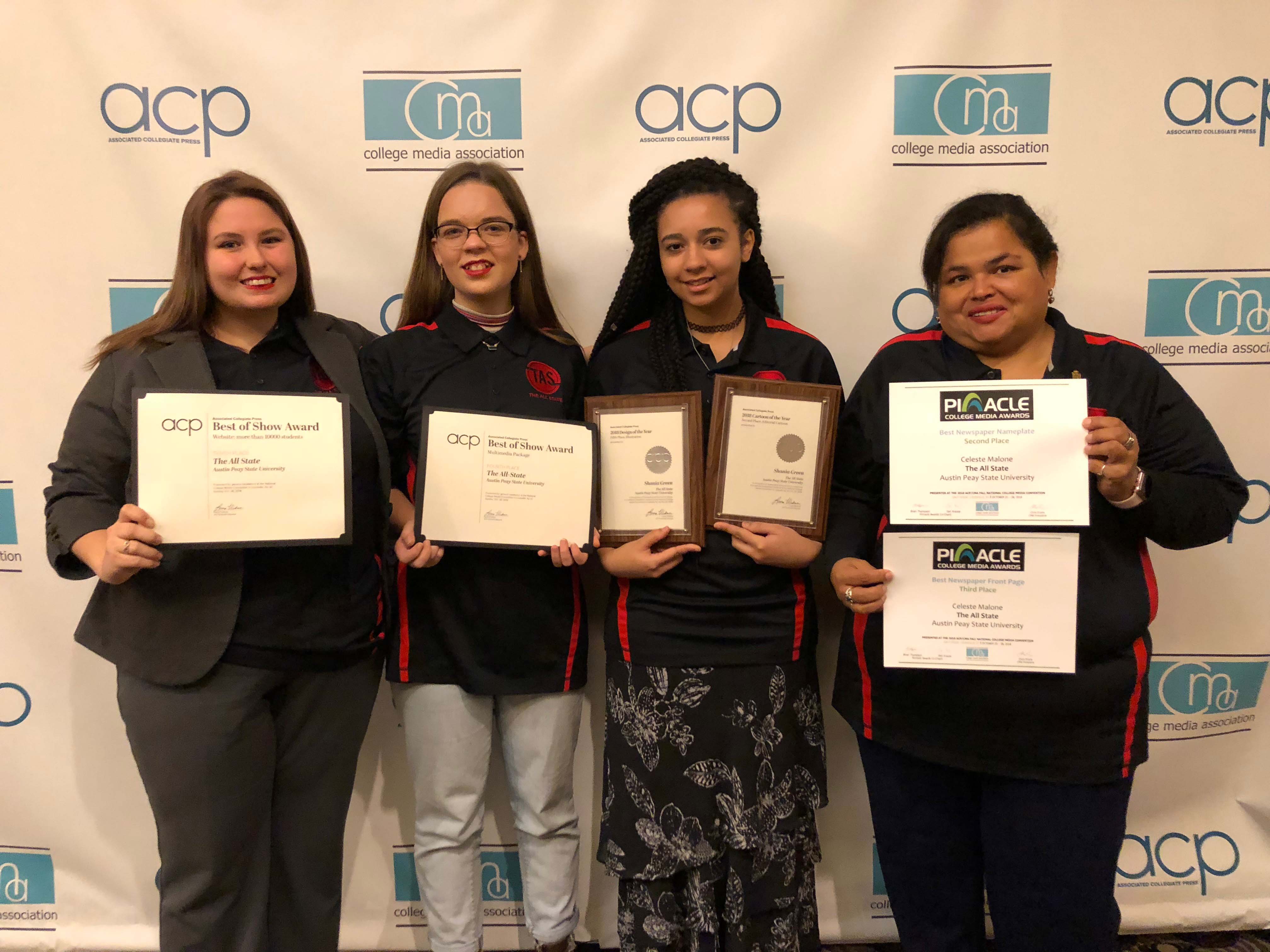 The All State earns 6 national awards at media convention

The ACP Individual Awards had more than 2,500 entries and spanned across 29 individual award categories. Roughly 11 percent — 281 entries — were selected as finalists. The CMA Pinnacle Awards set a record this year with 408 total organizational entries from 294 colleges/universities, and 2,608 total individual category entries from 320 colleges/universities. Middle Tennessee State University and Vanderbilt University were the only other Tennessee schools to earn national awards at the conference. Attending the conference from The All State student staff were Joann Morales, junior and photo editor; Maisie Williams, freshman and staff writer; Courtney McCormick, junior and chief copy editor; and Green.

Green earned her two national awards from the same editorial cartoon. After the mass shooting in Las Vegas, she created an illustration connecting two opinions in the Perspective’s section on gun control and terrorism. “It was such a great honor to be presented with something so prestigious,” she said. “It's definitely something I'll always remember.” In February of this year, Green was ranked 1st for Best News-Editorial Artist/Illustrator from the regional Southeast Journalism Conference.

Malone earned her two national awards for an illustration using zombie hands, and a front-page layout using a student newspaper photograph and story about a #MeToo movement event on campus. “I am so thankful for the opportunity to represent APSU and The All State,” she said. “This organization is more than just a job, it is a teaching tool to help students reach their fullest potential.” Malone currently serves on the APSU Board of Trustees as the student representative.

“I couldn’t get the smile off my face as I heard about each award announcement,” said Ashley Thompson, editor-in-chief. “We are lucky to have such talented writers and graphic designers on our team. I am very proud of all the work our staff puts into the paper,” Thompson said. “These awards are all well-earned.”

“I felt like the conference aided me in many different ways,” McCormick said. “I am definitely thankful to have had that opportunity to attend workshops and network.” McCormick and Williams spent a lot of time working on a multimedia package related to former Gov. Phil Bredesen’s Senate campaign visit to APSU. “What I did not expect [during the conference] was that I would gain the greatest insights from hands on experience with my fellow staff members,” Williams said. “Through working in direct partnership with Courtney on both the editing and implementation of multimedia aspects to the Bredesen article, we were able to not only attain 4th place in Best of Show, but also to create an incredible article which would not have existed otherwise.”

The conference was co-sponsored by the Associated Collegiate Press and the College Media Association with more than 275 sessions offered on various topics.

The All State earned 22 awards from the following contests:

REGIONAL: Best of the South Awards 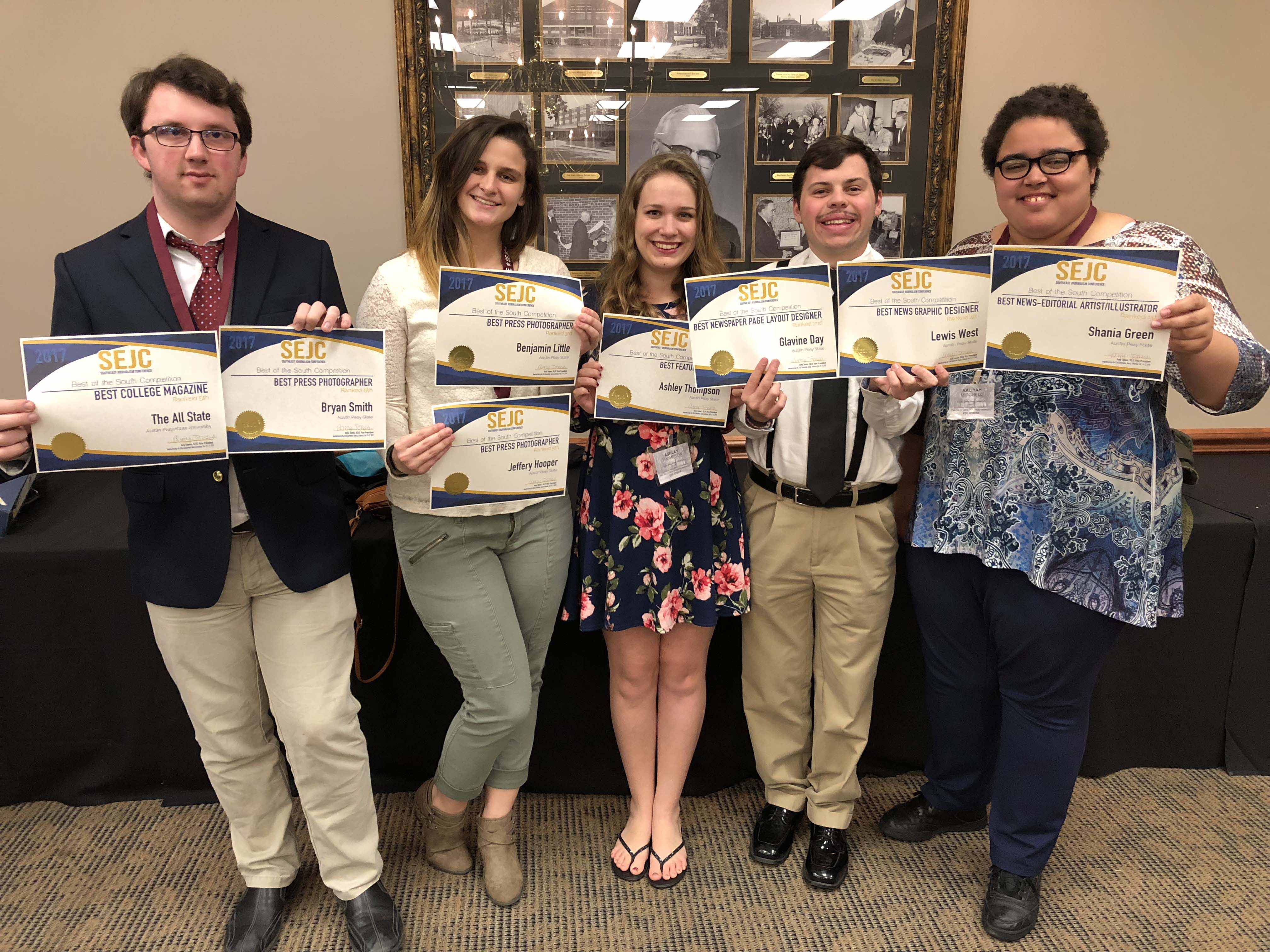 There were 412 entries from 30 colleges and universities across the southeast in this year’s Best of the South competition. The On-Site competition had 170 entries across 15 categories. Out of 28 entries, three photographers earned 3rd, 5th and 8th, respectively for Best Press Photographer. This was also the most entries a school could enter in the same category and the only school to have three wins in a category.

Student Publications and The All State created an Archive Gallery on the first floor of the Morgan University Center. Front pages were selected from the Woodward Library digital collections of The All State student newspaper and were printed at Printing Services. The images will be updated over time to 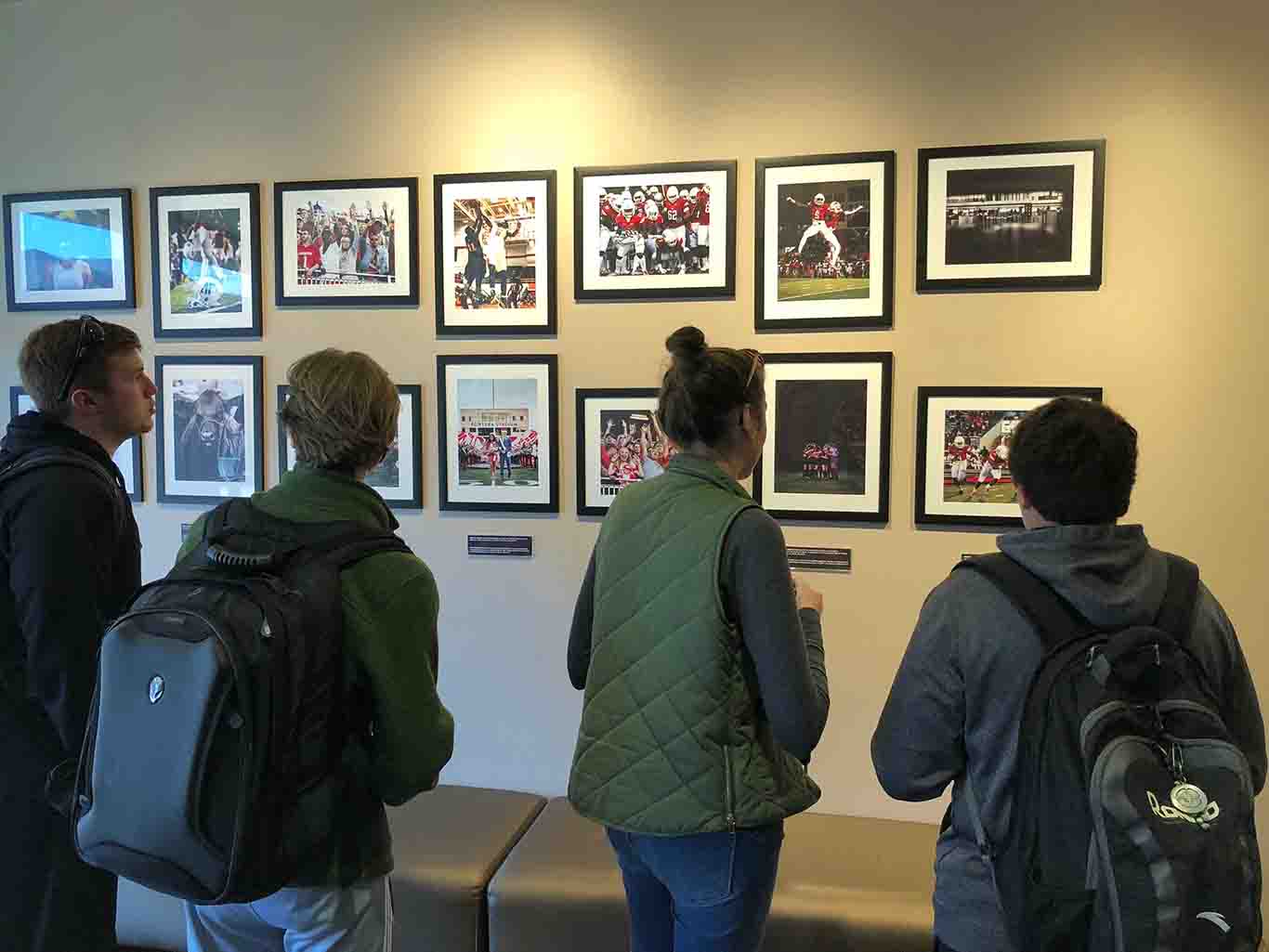 correlate with events on campus and to continually showcase the impact and history of The All State.

A new photo gallery was created on the third floor of the Morgan University Center to celebrate and display the photographic work of The All State student photographers. The gallery was launched by Student Publications with space provided by University Facilities.

Student Publications and The All State staff provided journalism training for fifth and sixth grade yearbook students from KIPP Academy in Nashville. The department and newspaper staff also provided journalism training for fifth-graders who produce a newspaper from North Stewart Elementary School in Stewart County. Topics discussed were photography, interviewing, plagiarism, writing process and the importance of the First Amendment. These experiences introduced elementary students to APSU and to skills that can be incorporated across their educational development.

More than 300 students attended a First Floor Open House in the Morgan University Center. The open house was a collaboration to increase awareness of the services and opportunities offered by the Adult, Nontraditional & Transfer Student Center; Student Publications; Auxiliary Services; Military Student

Student Publications and The All State photographers provided photography services for Grad Gala events and at a LinkedIn booth for the spring Career Fair. In total 274 portraits were provided for students.  Grad Gala events are coordinated by the Office of the Registrar.

Patrick Armstrong, coordinator of Student Publications and Marketing, was named to both the National College Media Association’s Fundraising and Finance Committees.

The coordinator of Student Publications and Marketing designed 60 unique marketing and informative pieces over the year for division departments in support of their programs and initiatives. 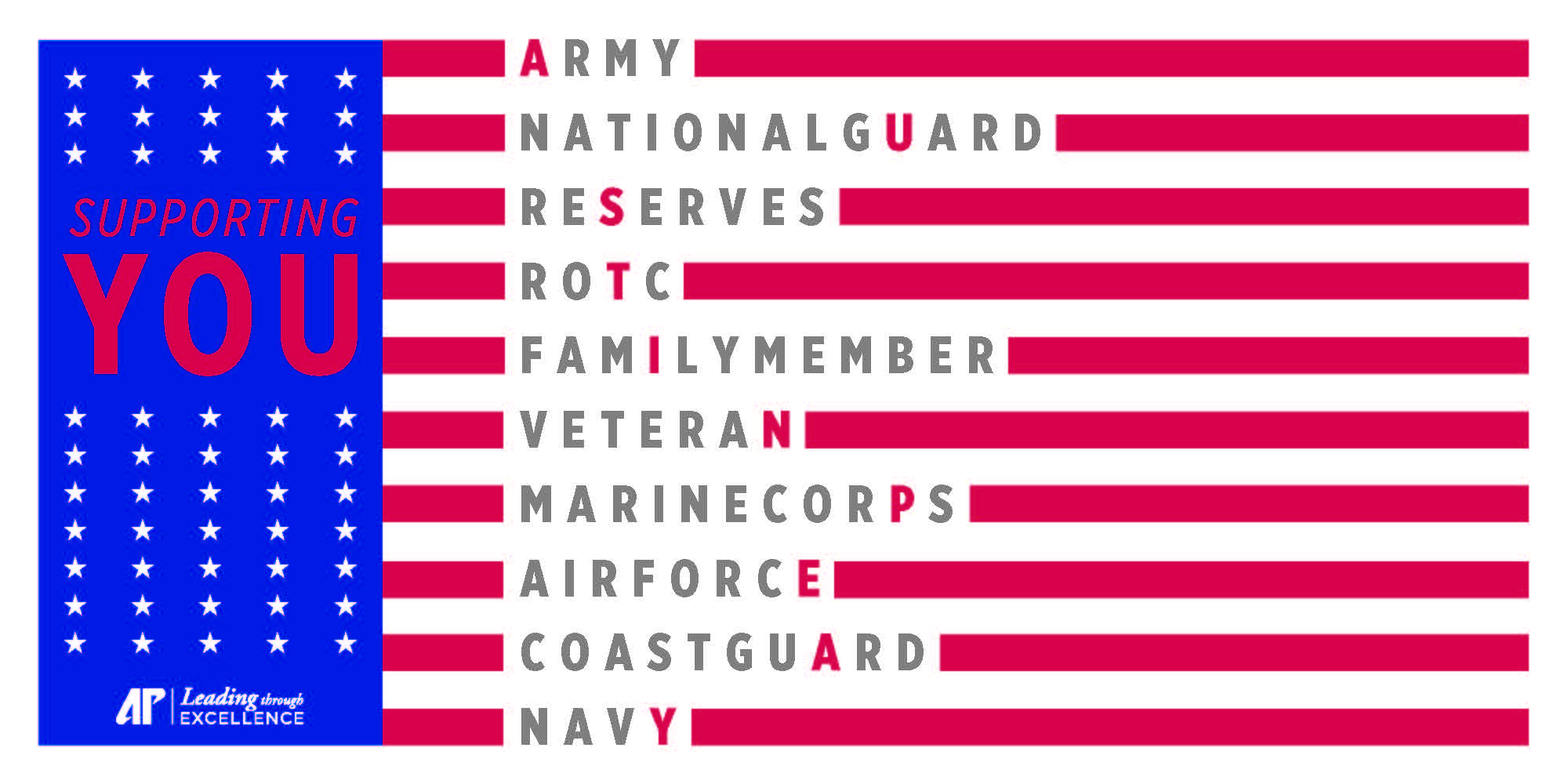 Jasmin Linares, coordinator of the Military Student Center, collaborated with Patrick Armstrong, coordinator of Student Publications and Marketing, to create a new marketing logo to promote support of APSU military-affiliated students. The design, “Supporting You,” earned Armstrong a silver ranking at the Tennessee College Public Relations Association for Best Illustration. This logo is placed in areas across campus and used in email signatures.

Student Publications is home to APSU's award-winning student newspaper and online news source, The All State. In addition to The All State, the department collaborates with other areas of campus to develop marketing and promotion materials as well as producing and distributing the Parent & Family Guide and Student Handbook & Calendar each year.

Our staff is among the most diverse on campus. We have students of every major, hometown and background. We offer a wealth of opportunities to learn, get valuable experience in many different fields, meet other APSU students and learn by doing what you enjoy. Whether it's graphic design, news writing, photography, advertising, public relations, social media, multimedia, video or leadership, Student Publications has an opportunity for you.

All of our staff are paid in scholarships. The Editor-in-Chief receives tuition benefits for their work over the course of one academic year.

Don't wait! Get the experience that will set you apart! Visit MUC 111 today to apply or click the link on the left of this page for staff and photography applications.