Home » Department of Art & Design » The New Gallery
In this section 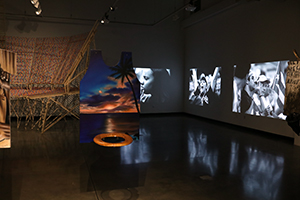 Spectacle was closed early due to concerns about the spread COVID-19 back in March, but it has remained installed in The New Gallery. During this time of national shutdown and the cancellation of major sports leagues around the world, Spectacle, reopens to new conversations about the importance of sport and safety of large gatherings.

Before the exhibit opened last spring, Michael Dickins, curator and director of The New Gallery, described Spectacle this way: “Spectacle is an exhibition that combines basketball and visual culture. It’s a three-person show that features the work of Brandon Donahue, Vesna Pavlović and Chris Boyd Taylor.”

Dickins originally envisioned the exhibit to coincide with March Madness, “the distinctly American phenomena surrounding collegiate basketball” during which spectators are “inundated with capitalist-driven, basketball-related imagery.”

The pandemic led to the cancellation of March Madness and nearly all American sports, but they have started to trickle back this summer, delivering an entirely unprecedented experience, one in which spectators are removed from stadiums and arenas.

“The Faculty Triennial is an exhibition that showcases the work of our talented faculty that teach within the department of Art + Design,” said Michael Dickins, curator and director of The New Gallery.

“All of our professors are also professional artists who exhibit their work in galleries and museums all over the globe, so The New Gallery hosts this exhibition every three years to give the students and community an opportunity to view this work together in one space. This exhibition reflects the talent, craftsmanship and dialogue that we also expect of our students and represents the variety of media that we teach here at APSU.”

Hargrave and Lynn described their work this way: “We have seen our fellow campers set up potted plants, satellite dishes, and full multi-course meals, in the middle of what we hope to be wilderness. This comfort and accessibility is in opposition to romantic visions of national parks and some approaches to conservation.

“As nature writer Edward Abbey put it in Desert Solitaire, ‘You can’t see anything from a car,’” the artists continued. “There is a value judgment implicit in this statement. Abbey and others equate a certain connection to nature with spirituality, purity, and a unique kind of enlightenment, but that sort of experience in the outdoors deliberately excludes most park-goers. Using a state with a wide variety of public lands as a springboard, we explore all five Utah National Parks – Zion, Arches, Canyonlands, Bryce Canyon and Capitol Reef – and consider the complexities of a relationship to landscape that is heavily mediated by vehicles, cameras and our own nostalgia.”

Michael Dickins
Curator and Director of The New Gallery and University Collections
(931) 221-6519
dickinsm@apsu.edu