Home » News » ‘Rodeo in STYLE’: How an iconic photographer’s images became a part of Austin Peay’s art collection
In this section
Michael Dickins

‘Rodeo in STYLE’: How an iconic photographer’s images became a part of Austin Peay’s art collection 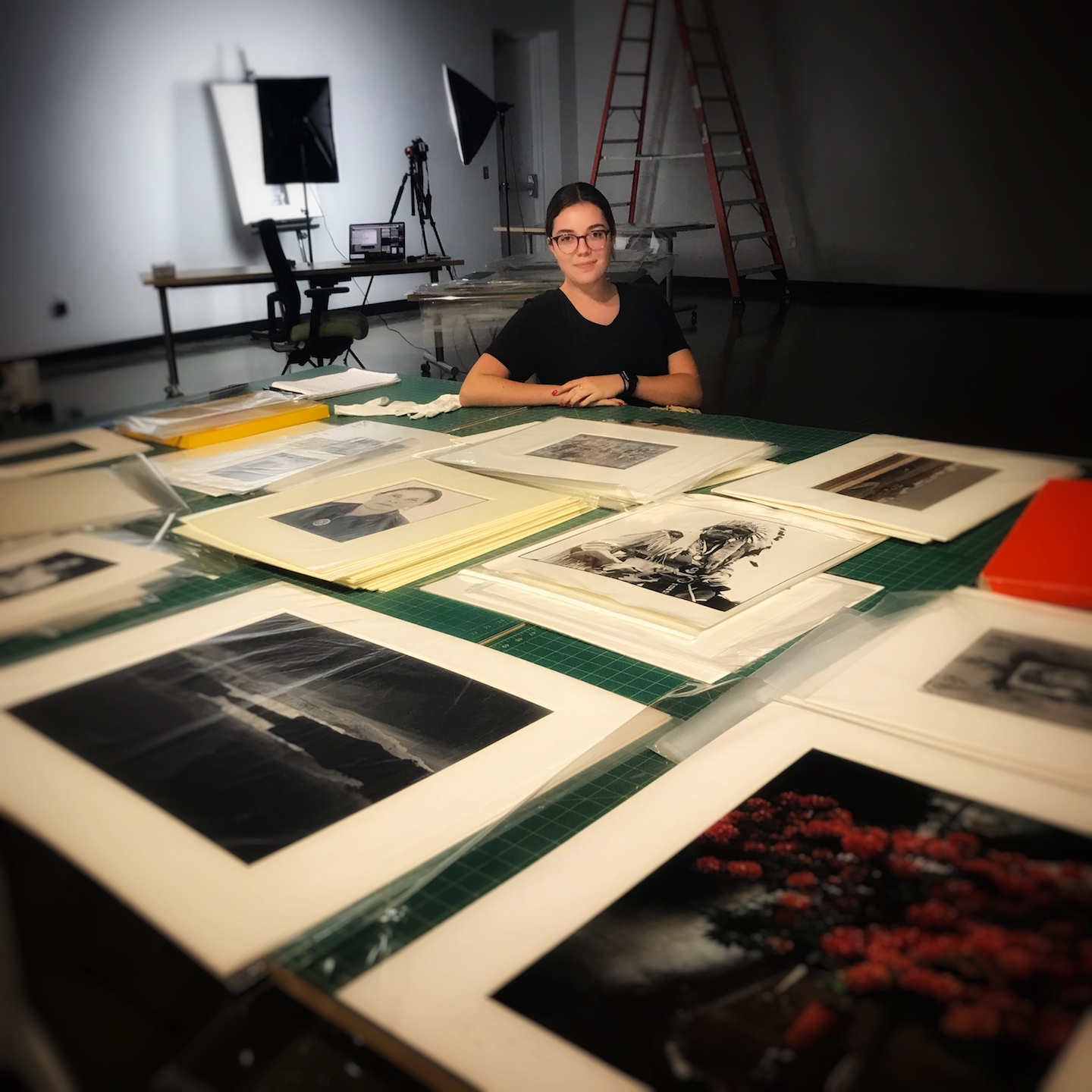 Katie Boyer with some of the photos she’s working with this summer, including some of Albert Watson's shown in the center of the table.

Early on, they dug deep into a stack of flat files and found a 1-inch-deep box that carried a curious label.

At the top of the label, an orange script read, “Watson.” Below that, scrawled handwriting called attention to Jim Robertson at the Fifth Avenue Gallery in Scottsdale, Arizona. At the bottom of the label, neat print listed the return address: Albert Watson Photography Inc., New York City.

And below the label, printed handwriting announced the title of the collected works in the box: “Rodeo in STYLE.”

Inside the box, 18 photos – in sharp black and white detail – captured a rodeo during a sun-splashed day in 1978 in Calgary, Alberta, Canada.

In one of the photos, a Native American man sits astride a horse. Feathers and leather straps festoon his head and shoulders. Large sunglasses add a smooth surface to his sun-aged face. Wrinkles crease his forehead and cheeks.

The photos also reveal a master – iconic fashion, celebrity and art photographer Albert Watson – at work. Watson’s work has appeared on more than 100 covers of Vogue and 40 covers of Rolling Stone. His most famous photos are the iconic hand-to-chin image of Steve Jobs and the photo of Alfred Hitchcock holding a plucked goose.

The rodeo photos also represent the journey from the photographer’s camera to Dickins and Boyer’s discovery, finding them 43 years later hidden away in a flat-file box at Austin Peay State University. 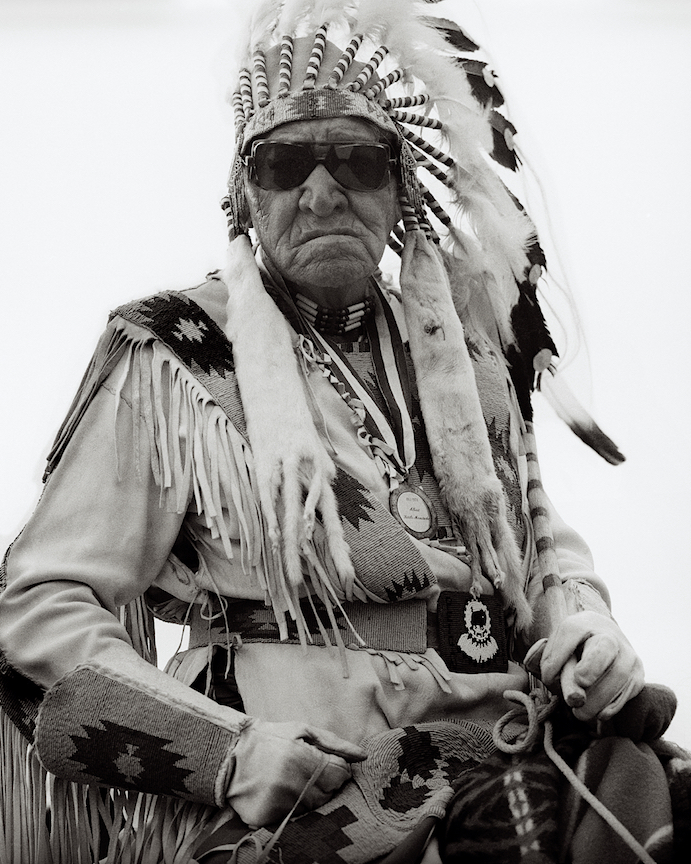 ‘I can recognize my mother’s handwriting’

Part of Dickins and Boyer’s work this summer involves framing more than 125 of Austin Peay’s most recently acquired pieces for an Aug. 18 exhibit.

“So we started pulling the pieces that we wanted to frame for the show, and we started finding all this other work that we found in the flat files,” Dickins said. “We found this box under a bunch of other flat boxes, essentially pushed in the back.

“We opened it up, and there are 18 of these gorgeous unsigned photographs,” he added. “Our first reaction was, ‘Wow! What is this that we have?’”

As the photographs are unsigned, Dickins and Boyer went online to research the only clue they had – the Albert Watson address label on the box. They found the studio still in business in New York and an active website, www.albertwatson.net. They searched for the photos on the website and didn’t find them.

They then performed a reverse image search on Google and found one of the rodeo pictures attributed to Albert Watson. They went back to the website and dug deeper through an archive of photos through the decades.

Dickins and Boyer contacted the studio and exchanged some emails with staff members there.

“That afternoon, we got an email from Albert Watson’s son and he said, ‘These are definitely Albert Watson’s photos, I can recognize my mother’s handwriting on the box,’” Dickins recalled.

Aaron Watson also confirmed that the photos were original prints hand-developed by the famous photographer in 1978. 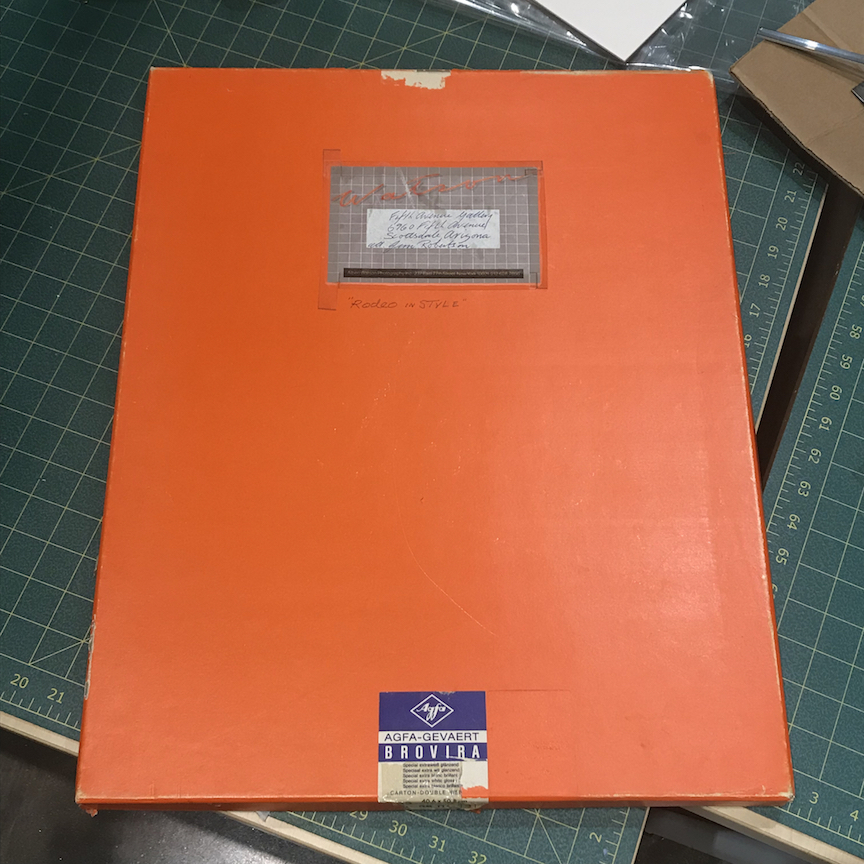 This image shows the box that Dickins and Boyer found while working with the University’s collection.

‘I’m still baffled by the discoveries the collection provides us’

The photos came to Austin Peay through the Robertson Collection, more than 300 photos donated to the University by Jim and Nan Robertson. The Robertsons gathered the photos during the 1970s and ’80s when Nan studied art in Arizona and Jim owned the Fifth Avenue Gallery of Photography in Scottsdale, Arizona. The Robertsons had connections with such distinguished artists as Bill Brandt, Bruce Barnbaum, Ansel Adams, Ruth Bernhard and André Kertesz.

The Watson photos that Dickins and Boyer found were supposed to go back to Albert Watson in the 1980s, Dickson said, but “during the fog of the 1980s” and Watson’s prolific work and travel schedule, the photos never made it back to New York.

Watson’s son, Aaron, offered to donate the photos to Austin Peay’s collection, and Dickins and Boyer sent to Aaron Watson high-resolution photos of the prints, which the studio started posting to Albert Watson’s Instagram page (see the rodeo photos at www.instagram.com/albertwatsonphotography).

“I think it’s interesting that we have 18 of his photos, but they aren’t his typical work,” Boyer said. “These aren’t photos that everybody has seen. I think he included some of them in his first book, ‘Cyclops,’ but other than that, these are photographs that people haven’t seen.”

You can see some of the Watson photos in Austin Peay’s collection at the end of the 1970s collection on Watson's website.

You’ll also get a chance to see some of the photos Aug. 18-Sept. 10 during The New Gallery’s first exhibition of the fall, “Recent Acquisitions.” The exhibit will feature more than 125 pieces recently added to Austin Peay’s art collection. The reception for “Recent Acquisitions” will be 5:30-7:30 p.m. Sept. 2 at The New Gallery during Clarksville’s First Thursday Art Crawl.

Dickins credits the Hazel Smith Summer Research Fellowship – which is supported by a recent endowment from Mark and Martha Em Raby and a matching amount from Austin Peay’s Center of Excellence for the Creative Arts – for allowing Boyer to help him with the collection this summer.

“I’ve been working with the collection for seven years now, and I’m still baffled by the discoveries it provides us,” Dickins said. “This fellowship has allowed for the extra personnel and focus that is often not afforded to us during the busy-ness of the semester.”

For more information about studying art and design at Austin Peay, visit www.apsu.edu/art-design.

For more about The New Gallery’s upcoming exhibits, visit www.apsu.edu/art-design/thenewgallery.