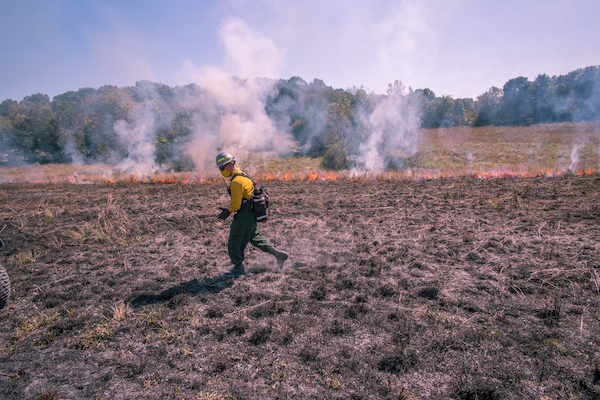 CLARKSVILLE, Tennessee – On a clear October afternoon, 15 acres of restored native prairie at Dunbar Cave State Park in Clarksville, Tennessee, went up in flames. Smoke lifted high over city streets and neighborhoods, while community volunteers and officials with the Tennessee Division of Natural Areas cheered on a well-planned prescribed fire to help promote and enhance native prairie species.

"Prescribed fire is an important land management tool,” explained Sam King, Stewardship Ecologist with the Tennessee Division of Natural Areas. “We hope to recreate the fire regimes of the past, whether naturally occurring or ignited by indigenous peoples managing their hunting and gathering lands. Fire has been an important factor in maintaining the diversity and open structure of grasslands in the Southeast."

The Oct. 7 event also marked an important milestone in a growing national conservation effort. In 2015, Austin Peay State University’s Southeastern Grasslands Initiative (SGI) began its mission of preserving imperiled grasslands across the region by creating a prairie at the park following a $35,000 donation by Roundstone Native Seed LLC. That mission, recently profiled by the Associated Press, continues to grow thanks to support from philanthropic organizations such as the BAND Foundation.

“At Dunbar Cave State Park, our prairie restoration is thriving after five years, and it was ready for its first prescribed burn,” said Dwayne Estes, Executive Director of the Southeastern Grasslands Initiative and Professor of Biology at Austin Peay State University (APSU). “Fire is the life and blood of prairies. It is essential for preventing trees from encroaching, burning off duff, allowing seed establishment, and recycling nutrients, thereby supporting the more than 350 species of plants, pollinators and other wildlife that thrive at this restored prairie.” 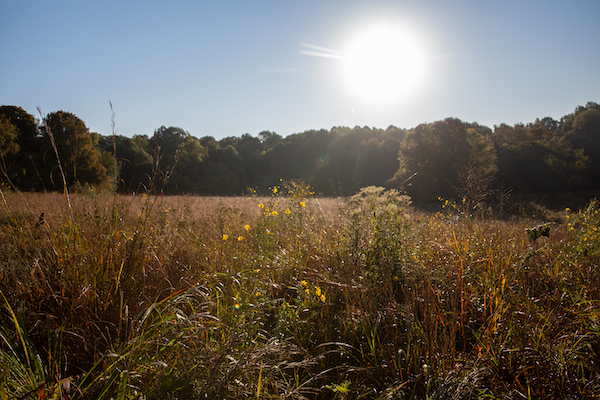 The restored native prairie before the fire.

Several organizations joined the Tennessee Division of Natural Areas and SGI in supporting the controlled burn, including Tennessee State Parks.

“Dunbar Cave State Park’s mission hinges on preserving and protecting the Indigenous American heritage and sacred nature of Dunbar Cave,” said David Britton, Park Manager. “This prairie restoration, and the recent burn, is an amazing example of holistic resource management and interpretation that seeks to connect stories to the landscapes we manage and preserve. Not only are we able to learn about indigenous uses of the cave, both sacred and profane, we are able to learn more about how these people managed and utilized their own landscapes. We are extremely grateful for the partnerships with the Tennessee Division of Natural Areas, and SGI to achieve these objectives.”

Chad Pugh, the farm manager for APSU, was a critical volunteer who assisted the burn by using the APSU Farm bush hog to mow the edge of the prairie near the roads to maintain a road-width buffer between the fire and the highway.

In the 1780s, the city street not far from the western boundary of the Dunbar prairie was a buffalo trail that wound through the prairie, savanna, and woodlands, connecting to a large cave spring then known as Buffalo Spring. Early settler Thomas Dunbar settled near the cave and it is today known as Dunbar Cave. The partnership between SGI, APSU, Division of Natural Areas and Dunbar Cave State Park is relying on historical data compiled by park manager, David Britton. Revolutionary War era land surveys reveal that the northern edge of the park was part of the once vast Big Barrens or Pennyroyal Plain Prairie. This was one of the South’s largest grasslands at 3.7 million acres and covered parts of Tennessee, Kentucky, and Indiana.