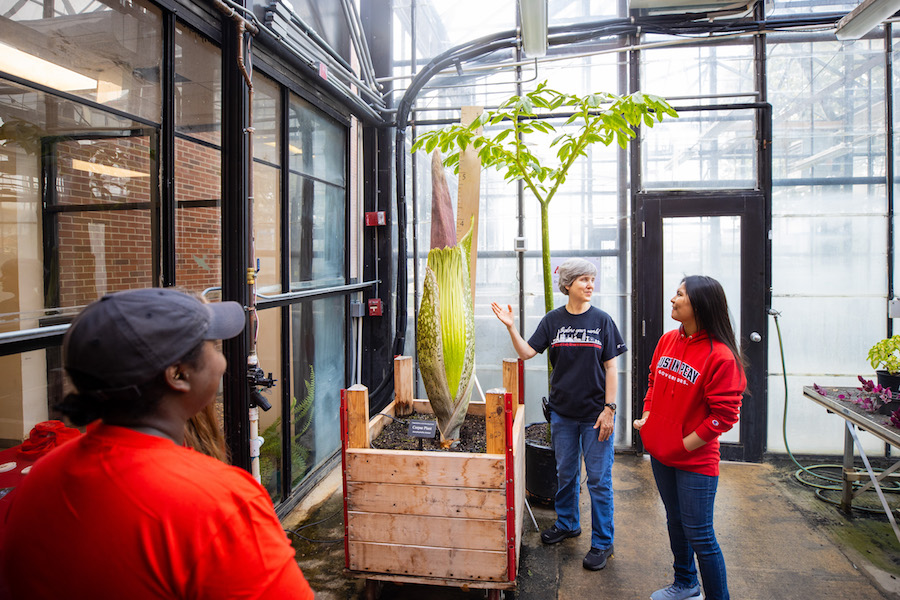 One of Austin Peay's corpse flower plants, Zeus, is blooming!

The plant's spathe - the sheath that resembles a single, large petal - started opening on the afternoon of Thursday, June 9.

Zeus started emitting its rancid stench at 7 p.m. as it continued to unfurl.

You can see Zeus from 6:30 a.m. to midnight on Thursday, June 9, and Friday, June 10, at the Sundquist Science Complex greenhouse. The greenhouse is on the first floor at the end of hallway “A.”

You also can watch Zeus bloom via livestream at the Department of Biology’s titan arum webpage.

Here's the original story that we posted on June 1, 2022, with more background information.

One of the corpse flower plants at Austin Peay State University appears ready to unfurl into one of the world’s rarest treasures – a flowering structure up to 8 feet tall that emits the odor of rotting meat.

“We’re used to flowers with sweet smells that attract bees and butterflies,” said Austin Peay biology professor Dr. Carol Baskauf. “The nickname for this plant is ‘corpse flower’ because it smells like rotting, dead meat. It stinks terribly.”

No sweet smells. No bees and butterflies.

As Austin Peay’s 8-year-old plant – nicknamed Zeus – emerges from its most recent dormancy, signs indicate that it may bloom in the next week or two. The central column of Zeus’ flowering structure has begun to emerge. When the plant actually blooms, Zeus will unleash its terrible stink.

But the bloom also has a sweet reward – especially for Austin Peay’s biology students. Although corpse flower blooms are becoming more common in cultivation, they’re extremely rare. As of 2019, only about 500 corpse flower plants lived in university or private collections or botanical gardens.

What makes seeing corpse flower blooms even rarer is the plants take 8-10 years to produce their first flowers, and the blooms last only 24-36 hours.

Zeus’ bloom will be a rare sight – and smell – indeed.

You can see Zeus from 6:30 a.m. to midnight through Friday, June 10, at Austin Peay’s Sundquist Science Complex greenhouse. The greenhouse is on the first floor at the end of hallway “A.” You also can watch Zeus grow and bloom via livestream at the Department of Biology’s titan arum webpage. 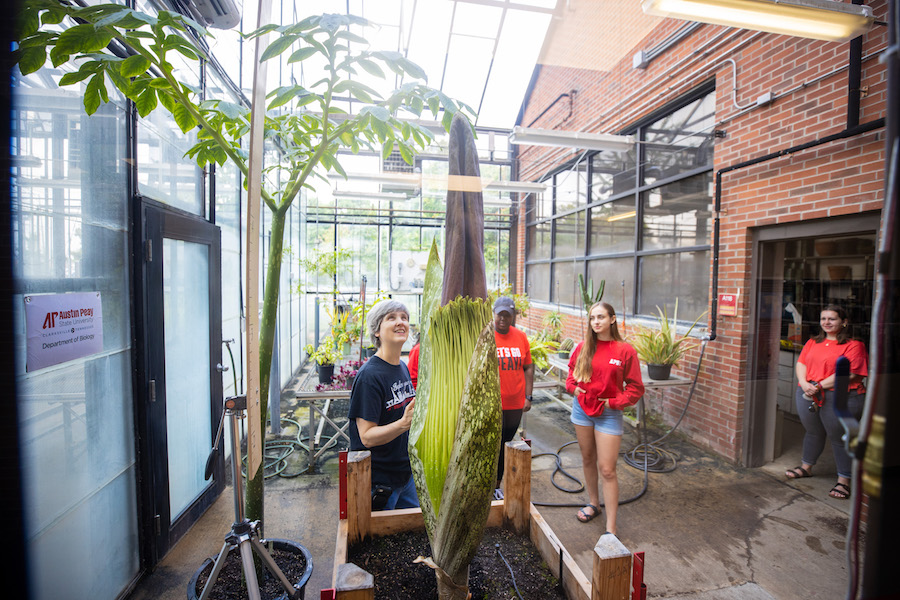 Zeus could bloom any day now.

What is a corpse flower?

Most people know the plant by the name corpse flower, but scientists call it Amorphophallus titanum or the titan arum. The plant grows naturally only in Sumatra, Indonesia. Only about 1,000 live in the wild, where the plant can grow to 15 feet tall.

Baskauf decided on Zeus “because that sounds big, mighty, and Zeus was the son of the titan Cronus.”

Regardless of what name you give it, the plant is a giant, and it has an odd lifecycle. The younger, yet unnamed titan arum in the Austin Peay greenhouse, for instance, looks like a tree right now. It isn’t.

Here’s the lifecycle, according to the Chicago Botanic Garden’s website:

The corpse flower blooms give the plant its fame because they’re difficult to predict, they happen rarely and they have that horrible corpse odor.

A 2010 scientific study found that the corpse flower smells like a combination of cheese, sweat, garlic, decomposing meat, feces and rotting fish.

The flowering structure – something that looks like one giant flower but is a collection of flowers – uses the rotting odor to attract pollinators like flies and carrion beetles.

Vanderbilt University greenhouse manager Jonathan Ertelt gave the older plant to Baskauf in 2018 and the second plant in 2020.

Even experts don’t know for sure when a corpse flower plant will bloom. Austin Peay’s older plant started showing signs of bloom in April because it came in a bit fuller than during previous cycles, Baskauf said.

She also has sought advice from Ertelt and Tim Pollak, assistant manager of plant production at Chicago Botanic Garden, which has 13 titan arums, along the way.

“Even when the flower spike is very close to full size and ready to open, it can be hard to say until one sees the spathe leaf starting to unfurl in a particular way that the entire inflorescence is definitely starting to open,” Ertelt said in 2018. “I would guess the plant at Austin Peay is four or five years from flowering."

Ertelt’s prediction appears to have blossomed quite well.