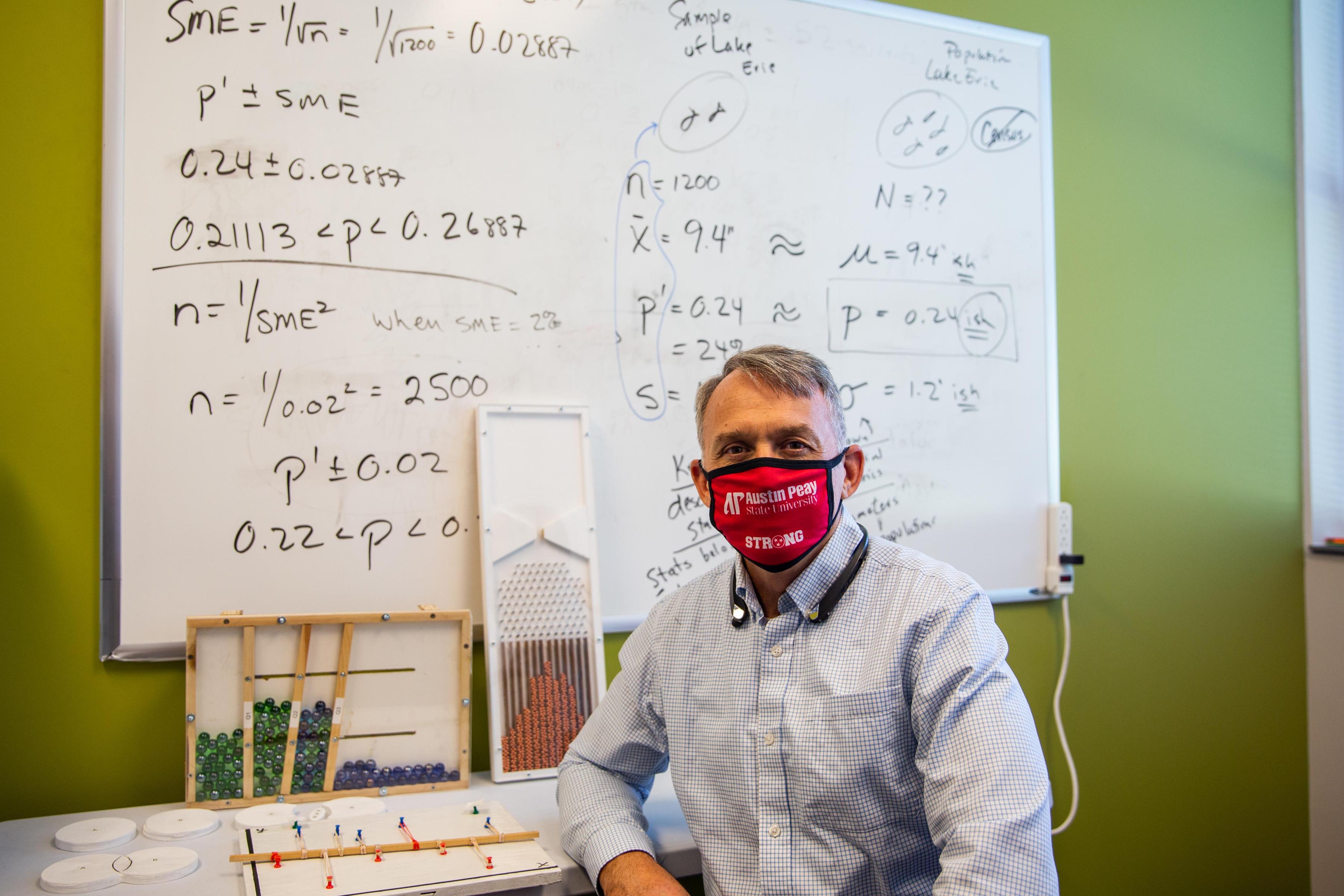 Sam Ligo sits with some of the models he has created for his students.

An Austin Peay State University statistics instructor for years has used his woodworking skills and engineering know-how to build mathematical models – real-world 3D representations of the math – to help his students learn. And over the summer, he built his latest learning tool – a Galton Board.

“I’ve always sought out the physical representation of the math as a learner, so I started thinking about these things, about how I can make the concept more physical for the students,” said Sam Ligo, who has taught in Austin Peay’s Department of Mathematics and Statistics since he retired as an Army colonel in 2012. “I think we all teach in the way we like to learn, and I like to learn by seeing and hearing and feeling the concepts.”

The Galton Board – also known as a bean machine – helps to demonstrate how random samples of a population tend to fall in a normal distribution (creating a bell curve). The mathematical concept is called the central limit theorem. You can see a Galton Board in action here.

The Galton Board, however, is just the latest of the mathematical gadgets that Ligo has built for his students over the years.

“It’s where my teaching and my profession come together, so as an engineer, it’s all about the application of the math,” he said. “The answer to that in my mind is, ‘Let’s make a three-dimensional model.’”

During Ligo’s 26-year Army career, he was a U.S. Military Academy at West Point-trained engineer. He also led the ROTC program at Austin Peay for four years as the professor of military science and taught statistics – similar to courses he now teaches at APSU – at West Point for more than three years.

He teaches non-mathematics majors at Austin Peay, and the models help his students grasp the concepts. Colleagues in the department also borrow the models for their classes.

“All of these models came as I taught one semester to the next and saw the points where the students really struggled with the abstractness of the concepts,” Ligo said. 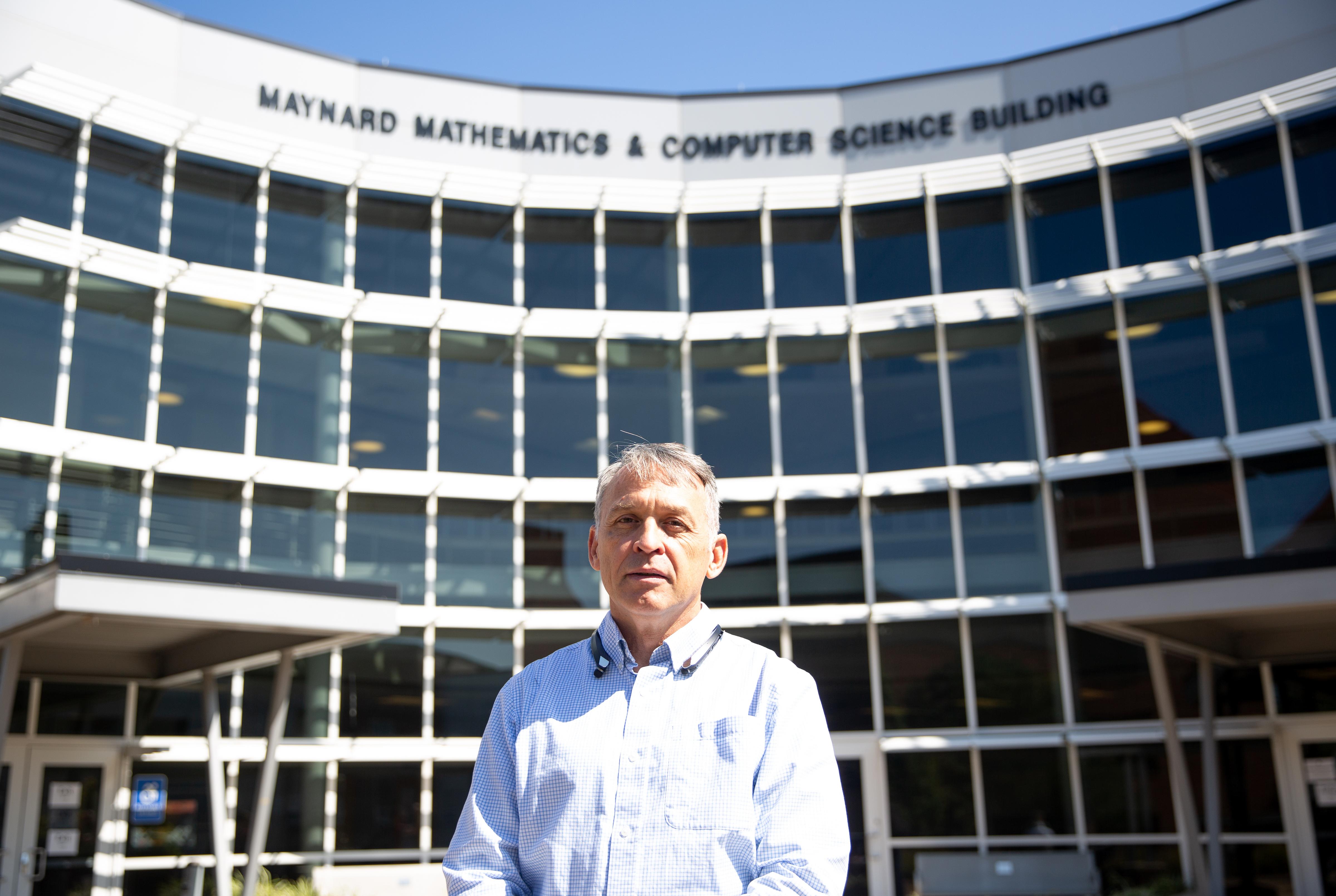 Ligo is a math instructor for the Department of Mathematics and Statistics.

Teaching during a pandemic

Ligo has 191 students in four classes this semester, and only about 50 of those are attending his lectures in person. A typical class has 12 students in the classroom and 30-40 watching via Zoom, he said.

He devoted much of his summer to making his fall classes as normal as possible, even if most the students had to watch his lectures online.

As the math models show, Ligo’s teaching style revolves around his working through problems by hand. He relies little on slides and spends most of his lectures working problems on a whiteboard or on paper under a camera, both broadcast over Zoom.

He credits the department’s teaching assistants who help him monitor the class experience and questions – in-person and online – for making the fall classes a success.

“I’m blessed that I have those teaching assistants. I have one for each of my four sections that do that job for me, which is key for this whole thing to work.” 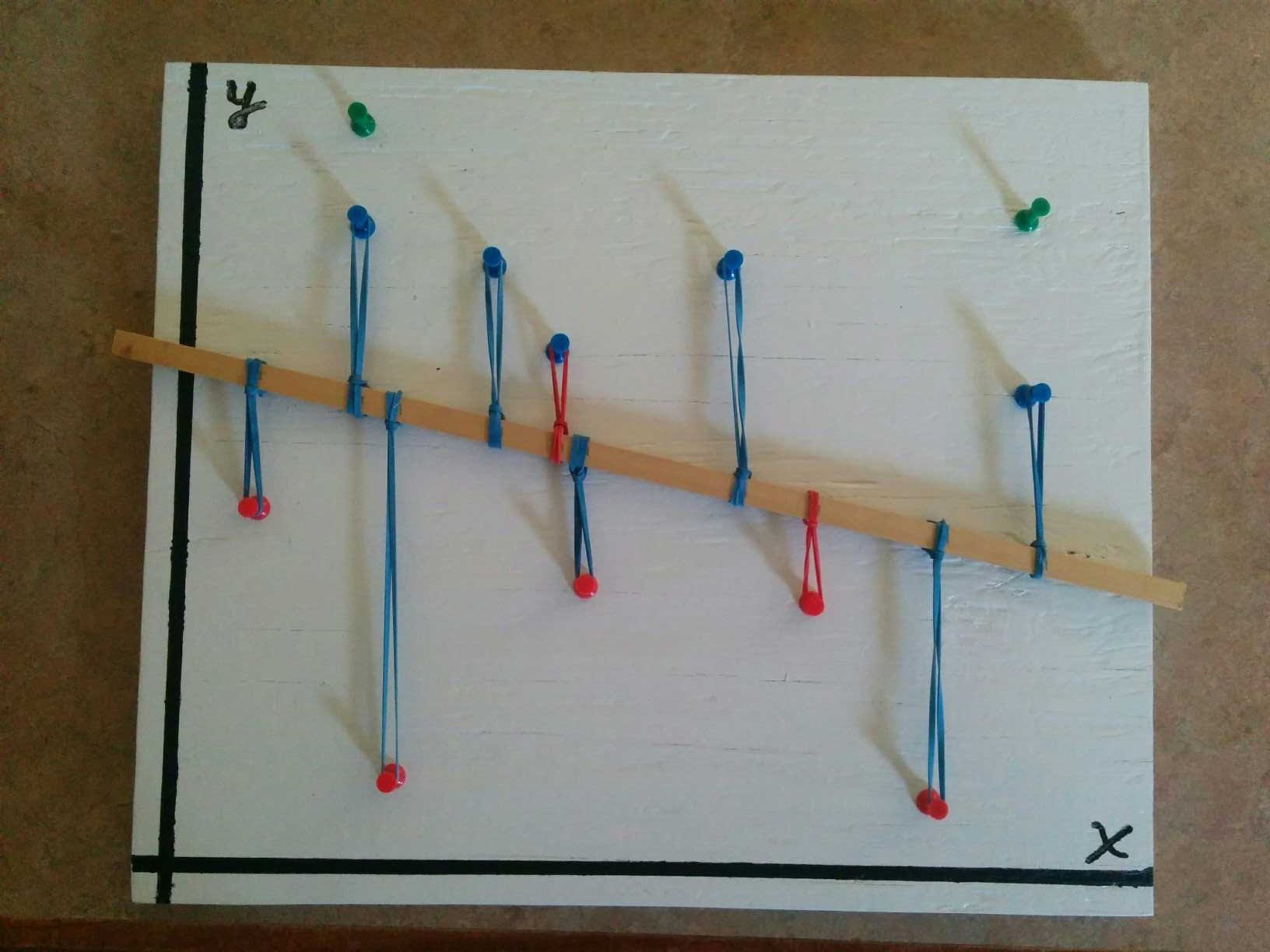 Bringing tools to the classroom 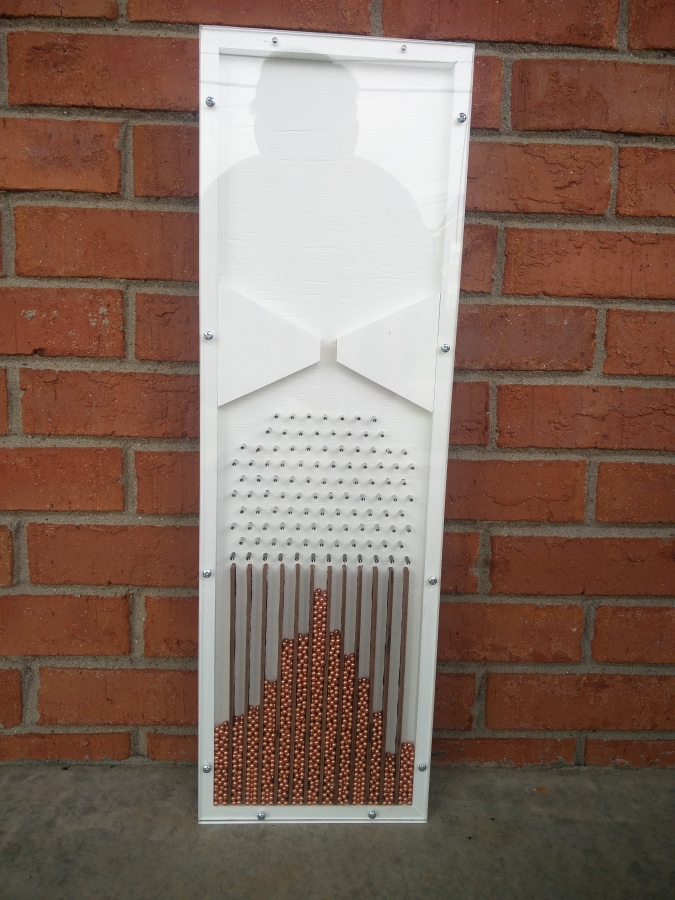 The first model that Ligo created to demonstrate a mathematical principle was a board that uses thumb tacks and rubber bands to show linear regression. Linear regression is a way to show the relationship between two or more variables.

“These rubber bands are fighting each other and stretching each other until you get this equilibrium,” he said as he moved the tacks around the board, showing how the rubber bands stretch between the points. “And that is exactly what the math is doing when you conduct a linear regression, the math at this point is struggling against that one, and there is the equilibrium.”

Ligo has built other teaching tools during his time as a teacher, including during his time in the Army when he used models to help teach aspiring soldiers how to navigate with maps. He has also built such tools as catapults, an Egyptian chain (used to measure right-angle triangles) and a marble board to show skew distribution.

The Galton Board idea came to Ligo in spring 2019.

“I’ve always been intrigued by these,” he said.

“Physics has all their cool stuff, and health and human sciences has their skeletons,” he said. “Everybody has something that they can literally bring to the table except math. One of the things we came up with was making a big and noisy Galton Board. It was conceived on AP Day, and then it had to cook for a long time before I could come up with a design that I could build that wasn’t terribly technical or too terribly fancy that I could build given the tools that I have in my garage.”

For more about the Department of Mathematics and Statistics at Austin Peay, visit https://apsu.edu/mathematics.