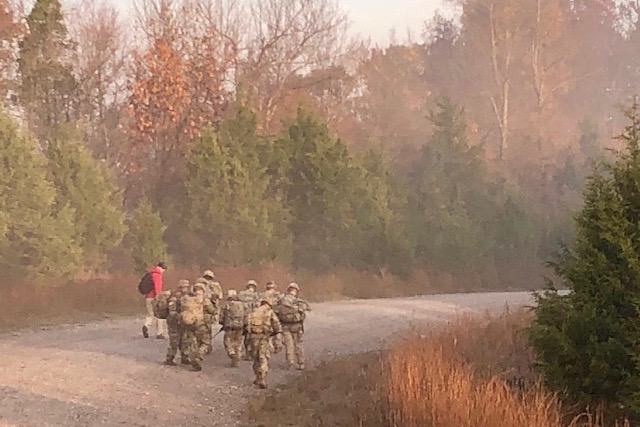 Austin Peay State University Governor’s Guard ROTC cadets continue to show why they’re among the best in the nation.

The Bold Warrior is a grueling, two-day challenge that pushes cadets during six straight hours of competition the first day and 16 hours the second day. Cadets covered about 40 miles of terrain during the two days, much of the time carrying ruck sacks.

“The whole point was to challenge everybody both mentally and physically, so everywhere they went they had to solve a problem,” Lt. Col. Eric Westphal, APSU professor of military science, said. “They had to have a plan; otherwise, they wouldn’t be successful.”

Austin Peay succeeded, competing against 17 teams and beating such universities as Michigan State, Notre Dame and Vanderbilt. All the teams in Bold Warrior had advanced from a preliminary round that included cadets from 109 schools. 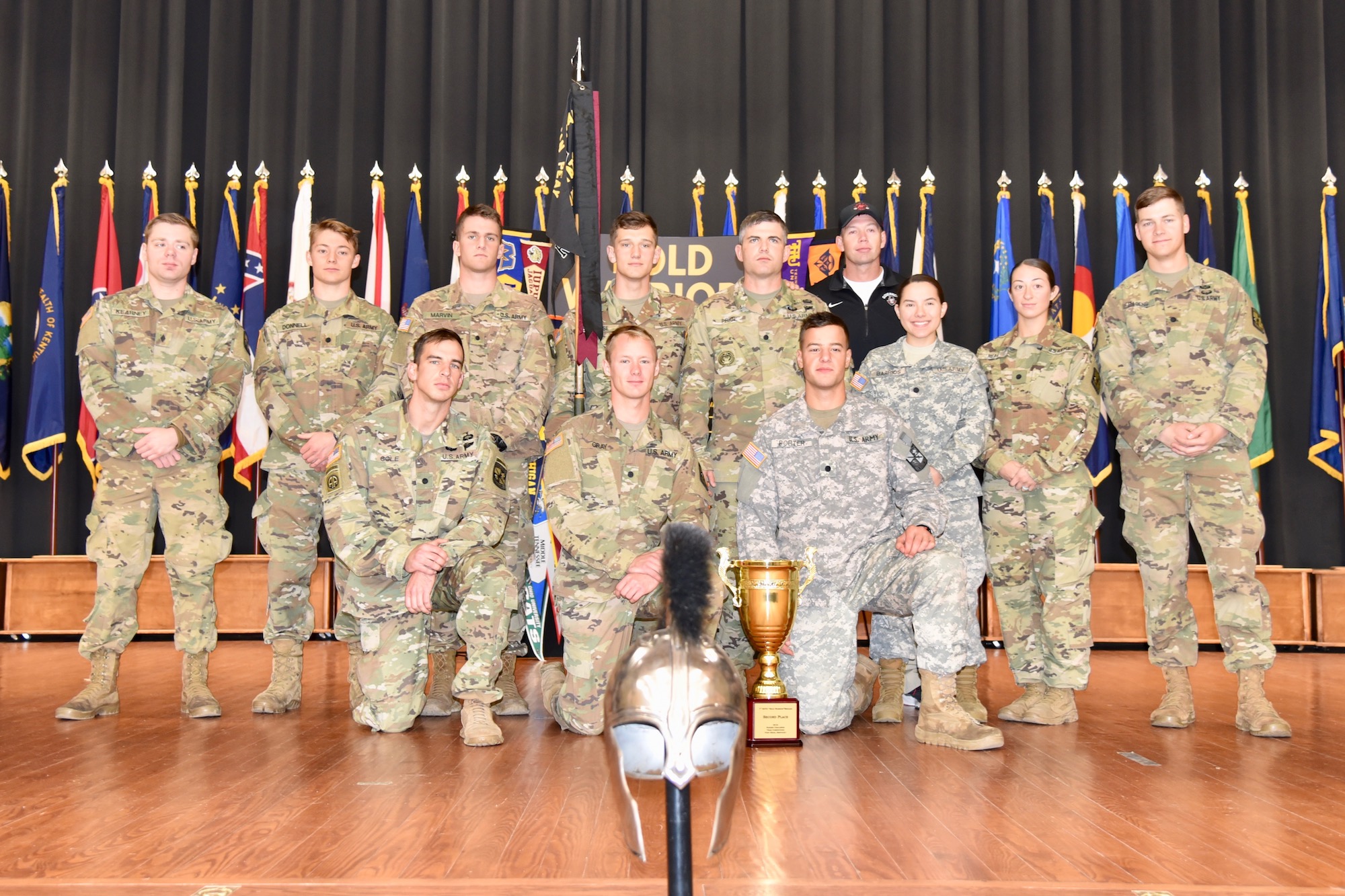 Cadets faced dozens of challenges during the two days, earning points along the way.

Friday night’s competition kept cadets at the barracks complex and challenged them with a series of physical and mental tasks, including climbing a 15-meter rope and navigating monkey bars as many times as possible in 10 minutes. Austin Peay finished the night in fifth place.

The next morning took the 11-member teams into the field from 6 a.m.-5:30 p.m. The day started with a 3.2-mile march to Fort Knox’s training area, where the cadets faced 15 challenges, or stations.

“They drop you off in the middle of the training area at Fort Knox and tell you ‘stay on this road until someone stops you,” APSU cadet and assistant team captain Daniel Cole said. Each stop represented a challenge in the competition. “‘Amazing Race’-style, we had to pick how we’d attack each challenge with the end state being getting as many done as you could.” 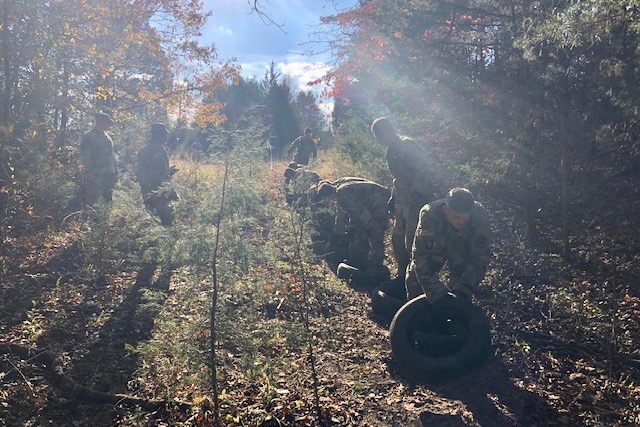 Austin Peay ROTC cadets tackle one of the challenges during the competition.

The most difficult of the challenges, “Pont du Hoc,” came in the afternoon, said Cole, a former sergeant first class and participant in the Army’s Green to Gold program at Austin Peay.

APSU team coach and retired Master Sgt. Keith Colman described Pont du Hoc this way: “They had to go down almost a cliff probably 250 meters, and then they had to climb back up. There were parts of it when they were on all fours, holding on to the rope, climbing.

“Once everybody was on top, one person had to touch a placard hanging in a tree.”

The cadets didn’t find a solution at first.

“It was the first time I saw the team struggle for a second,” Cole said.

Cadet Kylie Head noted she had experienced a similar challenge while cheerleading.

“So, they made a human pyramid and threw her up there to hit the sign,” Colman said.

Austin Peay was one of only four teams to finish all the challenges.

EXCELLING AT THE COMMANDER’S CHALLENGE 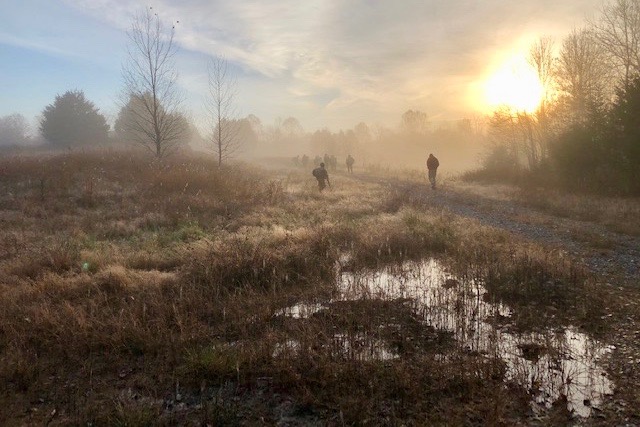 After the Day 2 stations, cadets faced a 4.5-mile march over rough terrain. This was more than 12 hours into the day. APSU cadet Wesley Gray finished first and cadet Thomas Porter finished third.

“It was just breaking people, they were hurting,” Westphal said.

The day wrapped up with the Commander’s Challenge, a CrossFit challenge known as a “Murph.” Cadets had run a 1.25-mile relay, do 100 pull-ups, 200 push-ups and 300 squats then run the relay again. The Murph happened at the end of 16 hours of competition.

By the end of the day, Austin Peay moved from fifth to second place.

“They were amazing,” Westphal said.

THE SECRET TO AUSTIN PEAY’S SUCCESS

“The second-place finish set the bar high for next year’s cadets,” Gray said. The winning team, Central State University, advances to the U.S. Military Academy’s Sandhurst Competition in the spring. “Although we all would have liked to win the competition to compete at West Point, our team now has more experience as to what it takes to compete at that level.”

A PEEK INSIDE THE CADETS’ TRAINING 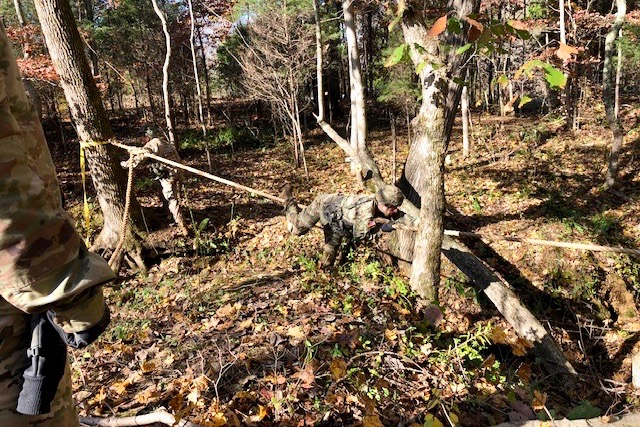 Gray broke down the three months of training (5:45-7 a.m. every day) leading up to the Bold Warrior: