Home » News » APSU history students use video-conferencing technology to connect with prominent authors across the U.S.
In this section
Charles Booth

APSU history students use video-conferencing technology to connect with prominent authors across the U.S. 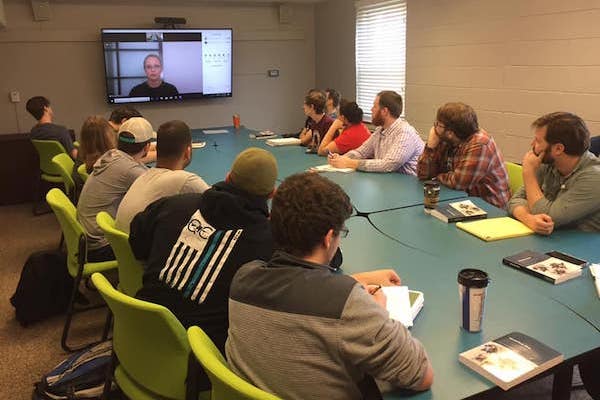 CLARKSVILLE, Tenn. – Books, unlike movies, don’t often come with “deleted scenes” or other bonus features. If you’re curious about the “making of” process or discovering what events didn’t make it into the final version, you’ll have to talk to the author. That’s what Austin Peay State University student Steve Sullivan did a few years ago, after he read “Ku Klux: The Birth of the Clan During Reconstruction” for a class assignment.

But tracking down nationally recognized historians can be tricky, so Dr. Minoa Uffelman, APSU professor of history, decided to make it easy for Sullivan. At the end of the semester, she took her class to a technology classroom in Austin Peay’s McReynolds Building, where they participated in a video conference with author Elaine Frantz Parsons.

“I was able to ask her about anything she would change or anything she had left out, which gave me a bit more insight,” Sullivan said. “Being able to ask and hear about things that didn’t make the final edit was like getting a sequel to the book.”

For the last few years, Uffelman has used video conferencing software, such as Zoom, to connect her students with prominent historians and authors across the country. Previously, she’d spend up to $1,000 of departmental money to bring these individuals to campus, but with continued advances in conferencing technology, she’s now able to have students talk with authors for free.

“The first time I did it, the professor was from Cornell University,” she said. “I couldn’t believe he was in Cornell, and we were in Clarksville talking to him.”

That professor was Edward Baptist, and in 2014 – the same year he spoke with Uffelman’s class – his book, “The Half Has Never Been Told: Slavery and the Making of American Capitalism,” became an international phenomenon. The Economist magazine, in an unprecedented move, retracted its negative review of the book, which complained of Baptist’s depiction of slaves as victims.

“We regret having published this and apologize for having done so,” an editor’s note in the magazine read.

The controversy made Baptist an author in great demand that year, leaving him little time to visit Austin Peay. But talking to APSU students from the comfort of his own office proved to be an easier solution.

“Twitter went crazy because it was the only time The Economist had retracted a book review, and my students were talking to him in the middle of all this,” Uffelman said.

From book club to classroom

Inviting an individual to give a talk on campus can sometimes turn into a logistical nightmare. There are schedules to consider, and if planes are missed or a snowstorm shuts down campus, the talk is canceled. All of this was probably in the back of Uffelman’s mind after work one night when her book club hosted its monthly meeting. Instead of simply talking about the novel they were reading, one of the club’s members set up a Skype interview with the author.

“Most people think Distance Education is just for geographically separated students and online faculty, but our department supports Digital Learning as a whole, regardless of location,” Amor Moran, interim director of Distance Education, said. “When Dr. Uffelman reached out, our department created the Zoom session with the historian and provided the room for the session to occur. I stayed for the duration of the class to troubleshoot any difficulties that may arise and walked away actually buying the historian’s book. The conversation between her and the students was just that interesting.” 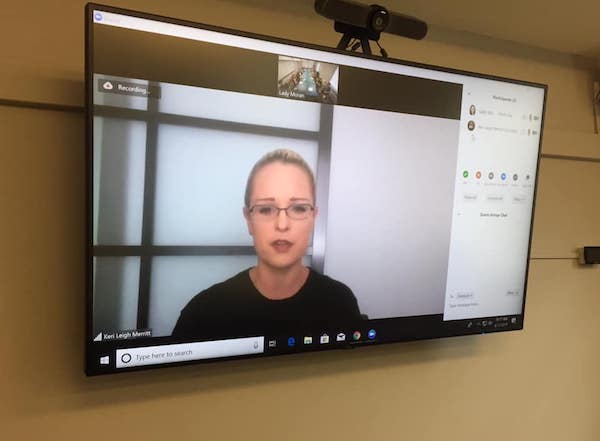 Every semester, Uffelman designs an upper-level course that includes an award-winning book on its syllabus. Throughout the next few months, students read the assigned text, discuss it in class and write their own review of it. All of this prepares them for the Zoom session at the end of the semester.

“Overall, by having the authors ‘in’ the classroom actually pushed many of us to READ the entire book instead of skim pages or look up summaries,” Zack Kinslow, APSU graduate, said. “Speaking to the person who created the work put that extra pressure on myself and my fellow students to take more time and effort into understanding not just the work itself but the history surrounding the topic. It made us feel important in that an actual historian is willing to take the time out of their busy schedule to talk to a class of graduate and undergraduate students.”

Before each video conference, Uffelman has her students write down questions, and they rehearse what they want to ask before the actual meeting. When the day comes for her class to speak with the academic celebrity, she’s often pleased with how they represent Austin Peay.

“They always bring their A-game; they make us shine,” she said. “Everybody we’ve talked to, they tell me I have excellent students.”

This fall, she’ll continue this tradition by having her students read Kevin M. Levin’s new book, “Searching for Black Confederates: The Civil War’s Most Persistent Myth.” Pulitzer Prize-winning author David W. Blight said, “Levin's book needs to be widely read as a rich history drawing the life out of a lethal narrative of wish fulfillment."

Later this fall, Uffelman’s students will ask Levin about his research during their Zoom meeting. And the experience will likely remain with them once they leave the University.

“By far, Dr. Uffelman's (Zoom) interviews were one of the highlights of my time at APSU,” Kinslow said. 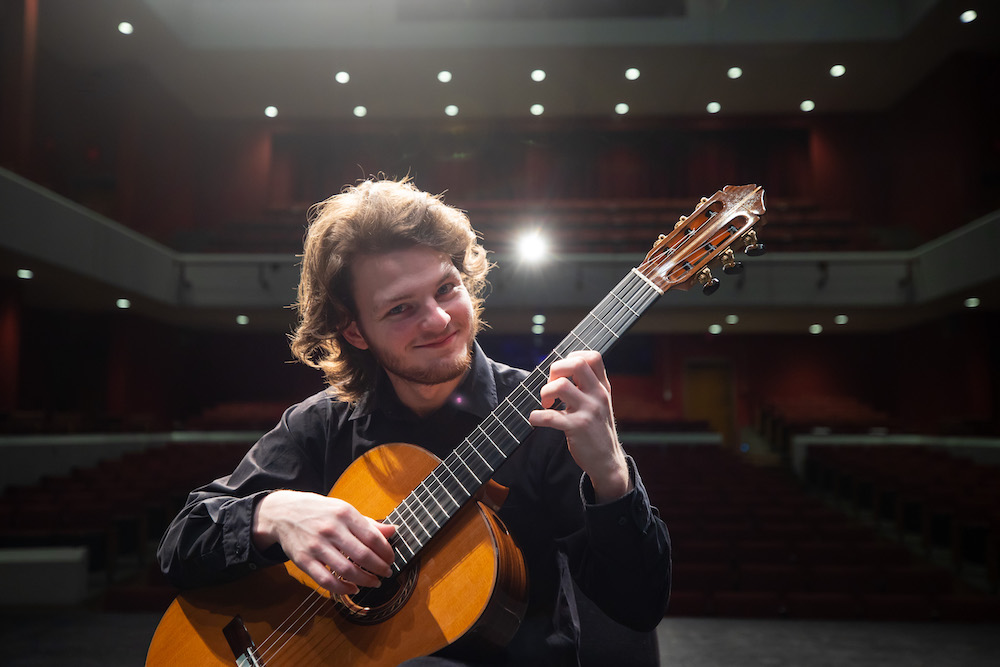 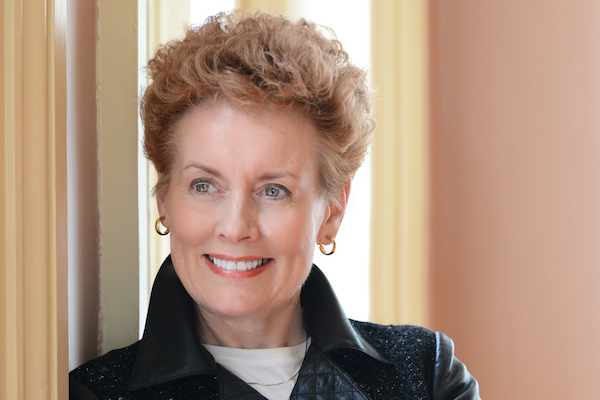 The Record: Sharon Mabry retires after a historic 52 years

During that five-decade-long career, she has mentored thousands of students, enhanced the cultural life of the Clarksville-Montgomery community, and helped transform Austin Peay's music department into one of the top programs in the Southeast. 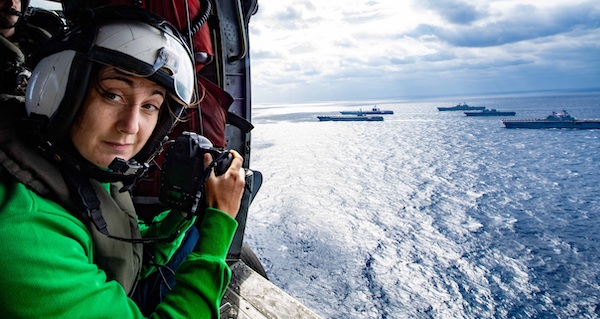 APSU alumna pursues Navy career on board the Carl Vinson

Larissa Dougherty calls the aircraft carrier home, and she spends her days documenting its travels and missions through photography, video production and writing.