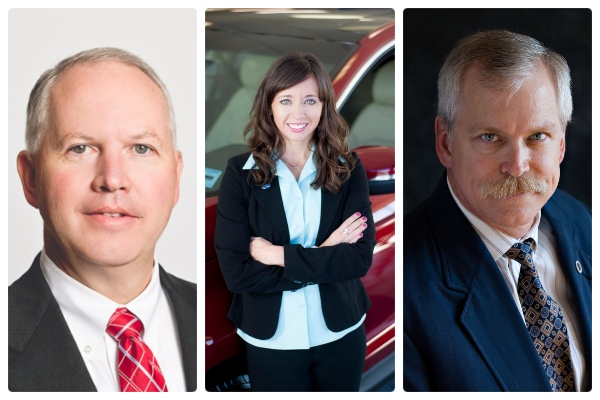 CLARKSVILLE, Tenn. – The Austin Peay State University Foundation recently hosted a spring dinner for its members at the University’s Morgan University Center, and during that event, the foundation elected three new officers to serve on its board. Chairman Tommy Bates, Vice Chair Barry Kulback (’79) and Secretary Casey Jenkins were selected to lead the organization.

Bates is the president and COO of Legends Bank in Clarksville. He has worked as a banker in the Middle Tennessee area for more than 30 years. He received a bachelor’s degree and a master’s degree from Middle Tennessee State University with an emphasis in Finance. He moved to the area in 1996 to work with the Clarksville office of First American National Bank. He also previously served on the foundation’s fund development sub-committee.

“I look forward to working with the foundation board and advancement staff over the next year to continue making Austin Peay a premier destination for students,” Bates said. “It’s an honor to serve as chairman and be able to see all the great things happening on and around campus.”

Kulback graduated from Austin Peay in 1979 with a bachelor’s degree in physics. Over the years, he has contributed to various University events, scholarships, organizations and athletics programs. Kulback is retired from Trane. This year, he and his wife, Maggie, served as Champions for Govs Give, Austin Peay’s annual 72-hour online fundraising campaign.

“I’ve been a board member of the foundation since 2010, most recently serving as chair of the fund development committee,” Kulback said. “I am excited and honored to now serve as board vice chair and look forward to working with the board membership, board and foundation officers, the APSU Office of University Advancement and University administration to raise Austin Peay to the next level.”

Jenkins, also a 2019 Govs Give Champion, is a longtime friend of the University. She is a former teacher and the current internet manager for her family’s local Ford-Lincoln-Honda dealership, Jenkins & Wynne.

“I’m a third generation proud Peay supporter,” Jenkins said. “For the past few years, I have served on the foundation’s athletics sub-committee. This has given me the opportunity to learn about the intricacies of the various APSU departments at the foundation meetings. I am honored to serve as the secretary of the foundation. My desire is to increase communication between departments and boards, and to improve awareness between the campus and community. I am grateful to work alongside such incredible people who care so deeply about the growth and impact of APSU.”