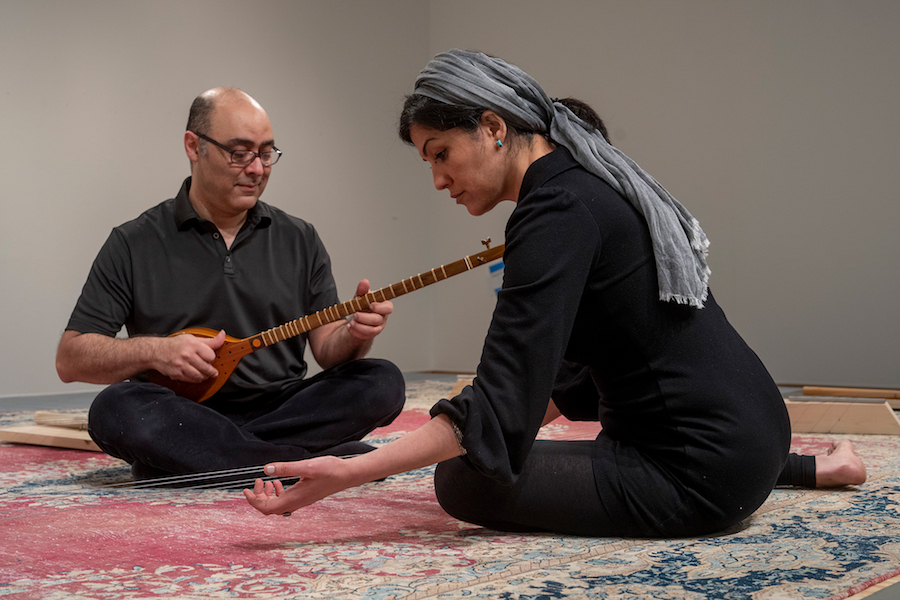 The New Gallery, with support from The Center of Excellence for the Creative Arts and the Austin Peay State University Department of Art + Design, is pleased to present Listening: The Fourth String by visual artist Raheleh Filsoofi and musician Reza Filsoofi to continue an engaging 2021-22 exhibition season.

“Listening: The Fourth String is an artistic collaboration that combines artist, musician and community,” said Michael Dickins, director of The New Gallery. “This project conceptualizes listening and examines the listening experience as a means for change in societal perceptions and intercultural communication, particularly in regards to the Middle Eastern Community in the Middle Tennessee region.

“Despite an estimated Middle Eastern population of 20,000 in Nashville and the surrounding area, the music scene of Nashville has not created a solid and ongoing platform for their art and music,” he added. “This project strives to create community engagement and bring awareness of Middle Eastern cultures and their unique contributions to art and music.”

The exhibit opens on Monday, Feb. 21, and runs through March 25 at The New Gallery, located in the Art + Design building at Austin Peay.

Inspired by the life and work of Moshtagh Ali Shah in the 18th century, this collaborative effort between ceramicist and visual artist Raheleh T. Filsoofi and musician Reza Filsoofi consists of a series of interactive multimedia installations and public performances.

In The New Gallery, visitors will be invited to sit and play a large 16-foot-by-20-foot instrument while being “watched” by Iranian musicians from a bank of large video screens.

Then visitors can then make their way upstairs to the Barbara Beach Gallery to learn how to play the setar with video instruction by Reza Filsoofi. It’s an interactive exhibit that encourages the community to play and learn.

All events are free and open to the public.

A virtual tour of the exhibition will be available soon and can be found at www.apsu.edu/art-design/thenewgallery.

This project is supported with funding from CECA, APSU, the Tennessee Arts Commission and Vanderbilt University.

Hours for The New Gallery are 9 a.m.-4 p.m. Monday-Friday, closed on weekends and holidays, and follows the university’s academic calendar.

For more information on this exhibition, which is free and open to the public, contact Dickins at dickinsm@apsu.edu. 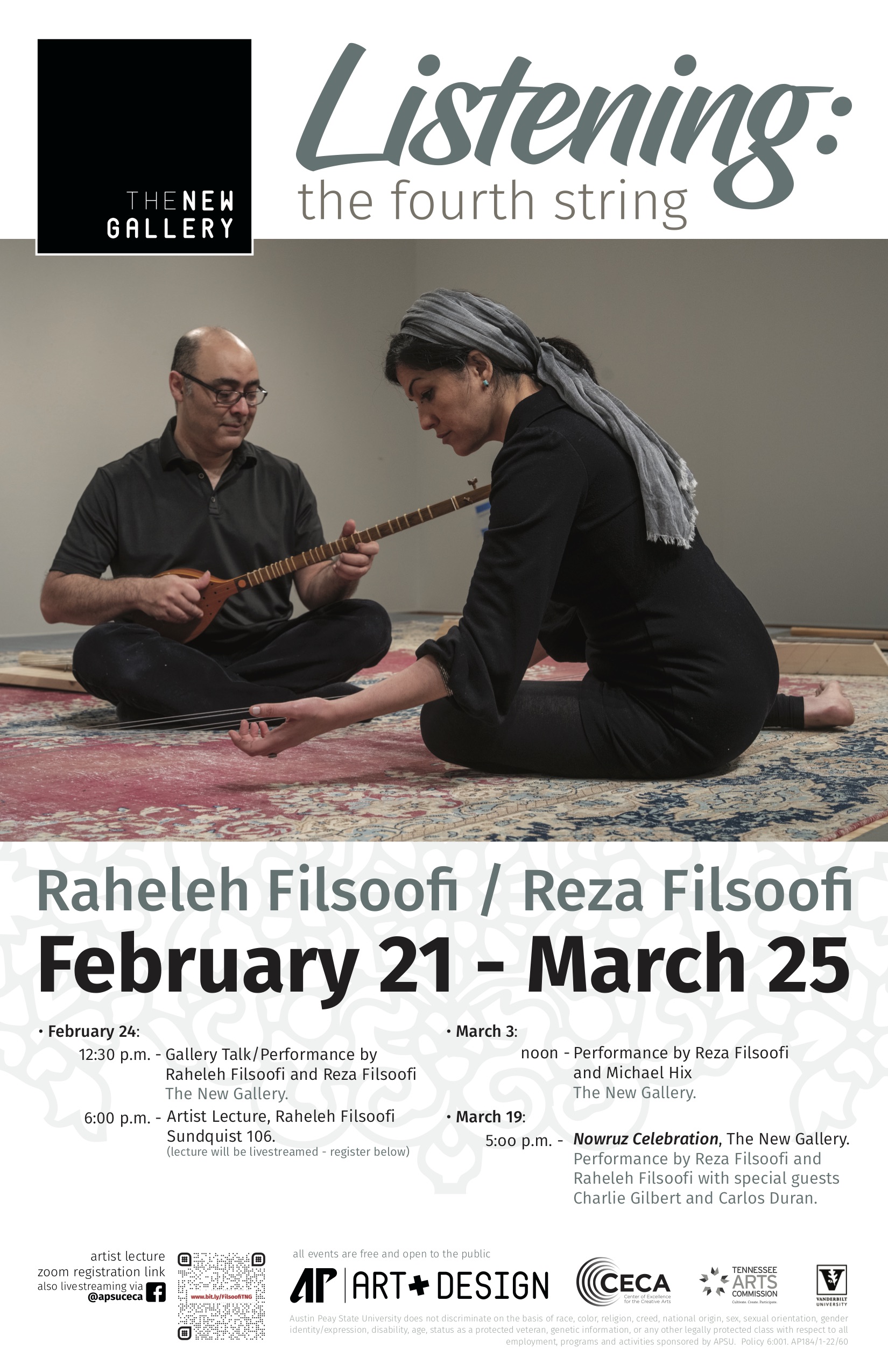 More about the project

Listening: The Fourth String is a reference to the traditional Iranian instrument the setar, which is similar to the better-known Indian sitar. Literally translated from the Persian Farsi language, setar means “three” (se) “strings” (tar), and the Iranian setar is a three-stringed instrument. However, centuries ago, the Iranian Sufi musician, Moshtagh Ali Shah, added a fourth string. This dramatically changed the instrument from its original configuration, enhancing the sound and allowing musicians to explore more complex compositional and performance possibilities, while retaining the traditional capabilities of the three-stringed instrument.

Shah’s contribution to musical culture, despite its historical significance, remains obscure as he has been deliberately excluded from the majority of textbooks and research articles by most scholars. His religious beliefs of Sufism, combined with his use of the setar in the recitation of the Qu’ran, led to his tragic death by stoning and his elimination from Iranian musical history.  Ironically, although his name has ceased to exist, the fourth string remains on the setar to this day as an invisible but invaluable testament to his contribution, one that resonates in more than one way as a reminder of cultural innovation and courage.

The proposed installation and performances intend to facilitate positive social change by educating those in attendance about Middle Eastern music, art and history through interaction and direct participation. It is also meant to serve as a tribute not only to Moshtagh Ali Shah but to the many silenced and censored artists throughout history who have remained obscure.

The installation endeavors to explore listening both as a concept and an act — through sounds, voices, instruments, perspectives, etc. — and highlight the null of the listening experience — that which typically is unheard and often ignored in a performance.

The goal is to challenge Middle Eastern stereotypes and broaden all participants’ knowledge and understanding. Music and art have the potential to expand cultural awareness, acting as a bridge to thoughtful listening to each side of the cultural divide.

Raheleh Filsoofi is a multidisciplinary Iranian-American artist based in the United States. Her work synthesizes sociopolitical statements as a point of departure and further challenges these fundamental arguments by incorporating ancient and contemporary media such as ceramics, poetry, ambient sound and video to create a holistic sensory experience. Her interdisciplinary practices examine the literal and figurative contexts of border, immigration, land and ownership. Raheleh is an assistant professor in ceramics at Vanderbilt University.

Reza Filsoofi is a multi-instrumentalist, singer and composer born in Tehran, Iran. Reza’s versatile musical styles combined with his expansive knowledge of different classical instruments have given him opportunities to collaborate with numerous artists and musicians on a variety of projects.

For over six years Raheleh and Reza Filsoofi’s socially engaged practices as visual artist and musician have brought groups of people together from diverse cultural backgrounds in South Florida and South Texas. They live and practice in Nashville, Tennessee.