“This is the first time in our history that we have exceeded 11,000 students,” Dr. Alisa White, APSU president, said. “It’s a good time to be a Governor.”

White stood at an outdoor podium on the bright, cold morning, surrounded by hundreds of Austin Peay students, faculty and staff. Several people in the crowd wore gloves, but that didn’t muffle the sound of their applause when the semester’s official enrollment number was unveiled.

“We’re the only locally governed institution (in Tennessee) to have positive growth the last four years,” Dr. Rex Gandy, APSU provost and vice president for academic affairs, said during last month’s Board of Trustees meeting. “Also, of all the nine public universities in Tennessee, over the past three-year average and four-year average, we lead the state in enrollment growth.”

“There are certain people who go way beyond the norm, and they’re the primary reason we are growing when many of our peers are not,” White said.

Austin Peay’s president then called upon the University’s Enrollment Management staff – made up of the offices of admissions, financial aid, veterans affairs, the registrar and the testing center – to gather in front of the podium.

“The people before you have made something incredibly special happen,” White said, adding later that those individuals “have distributed tens of thousands of brochures to high schoolers. They have responded to hundreds of thousands of phone calls. They have visited hundreds of high schools. They have driven thousands of miles, spent countless hours on the road away from their families, worked weekends and late hours, and I just want them to know how grateful I am, how special you are and how much you’re valued at Austin Peay.” 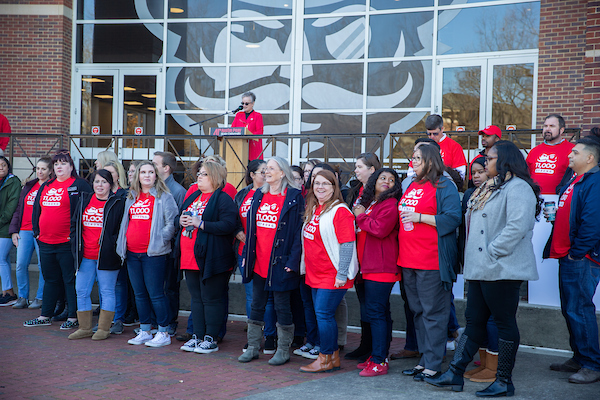 For the last several  years, the enrollment management staff has convinced some of the country’s top students to join the Austin Peay family. Those students include Yvette Anderson, an Indiana native who talked to an APSU admissions counselor at a college fair in Indianapolis. Before that evening, Anderson had never heard of Austin Peay.

“The school was diverse, just the right size and had plenty of fun opportunities,” she said. “I absolutely love Austin Peay. I feel like it was the best school for me in all aspects. I have made lifetime friendships and feel very at home four hours from my hometown.”