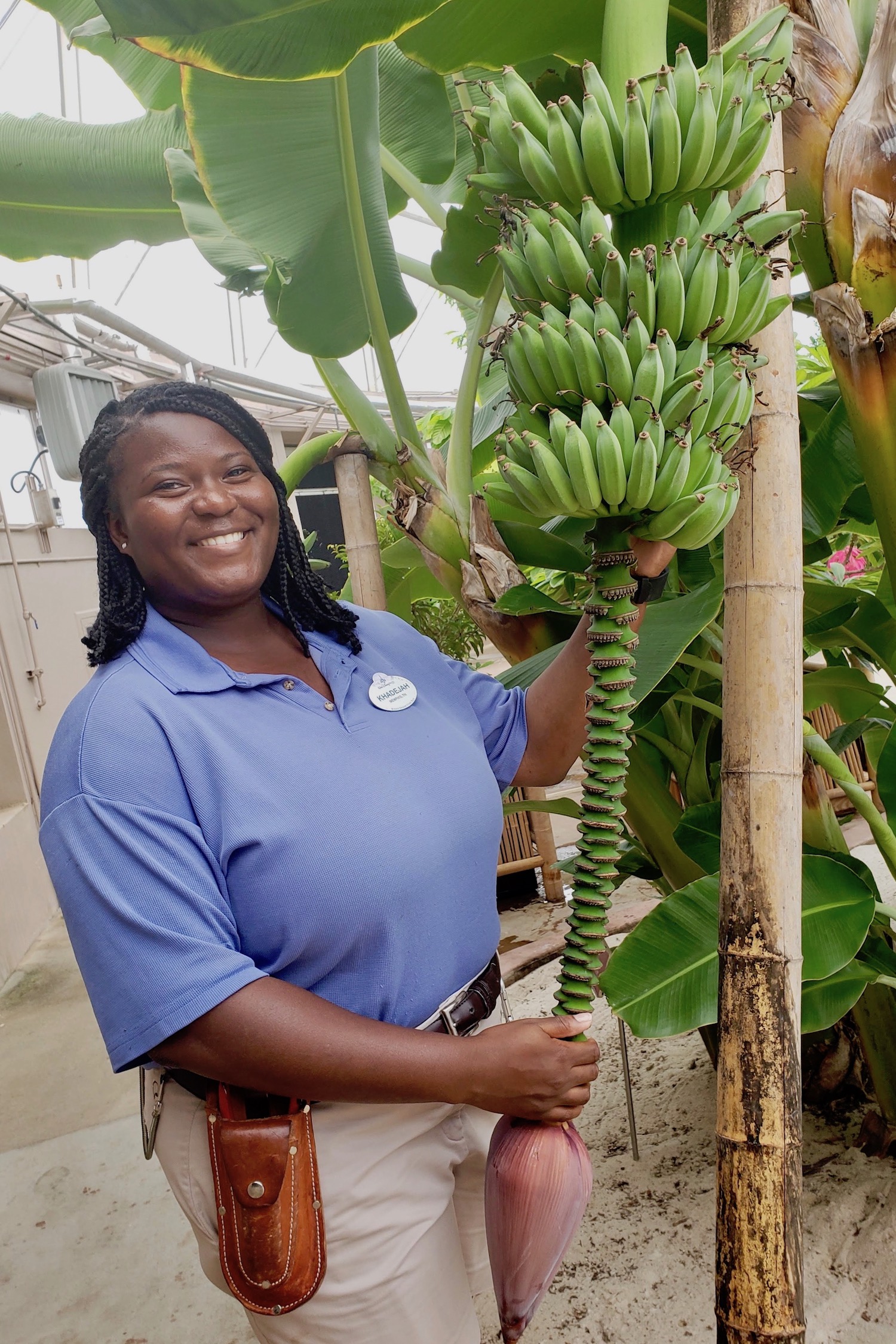 “They don’t sting, and they’re really small,” Scott said, “similar to the size of an ant when they’re at their biggest.”

But these wasps could deliver a big economic impact.

Scott is on an agricultural sciences professional internship at Disney World through the end of January, and she has many jobs rotating through Epcot’s 2.5 million square feet of greenhouses, where food is produced for much of the park’s restaurants.

If you’ve been to Epcot, you might know where Scott is working: The park has a 13-minute boat ride named “Living with the Land” that traverses the greenhouses.

The greenhouses also give scientists like Scott a place to research high-yield growing techniques, including vertical gardens, a giant trellised “tomato tree,” and hydroponic and aeroponic gardens.

But Scott said the most important job she’s had is researching those tiny wasps, which is part of Epcot’s entomology program. 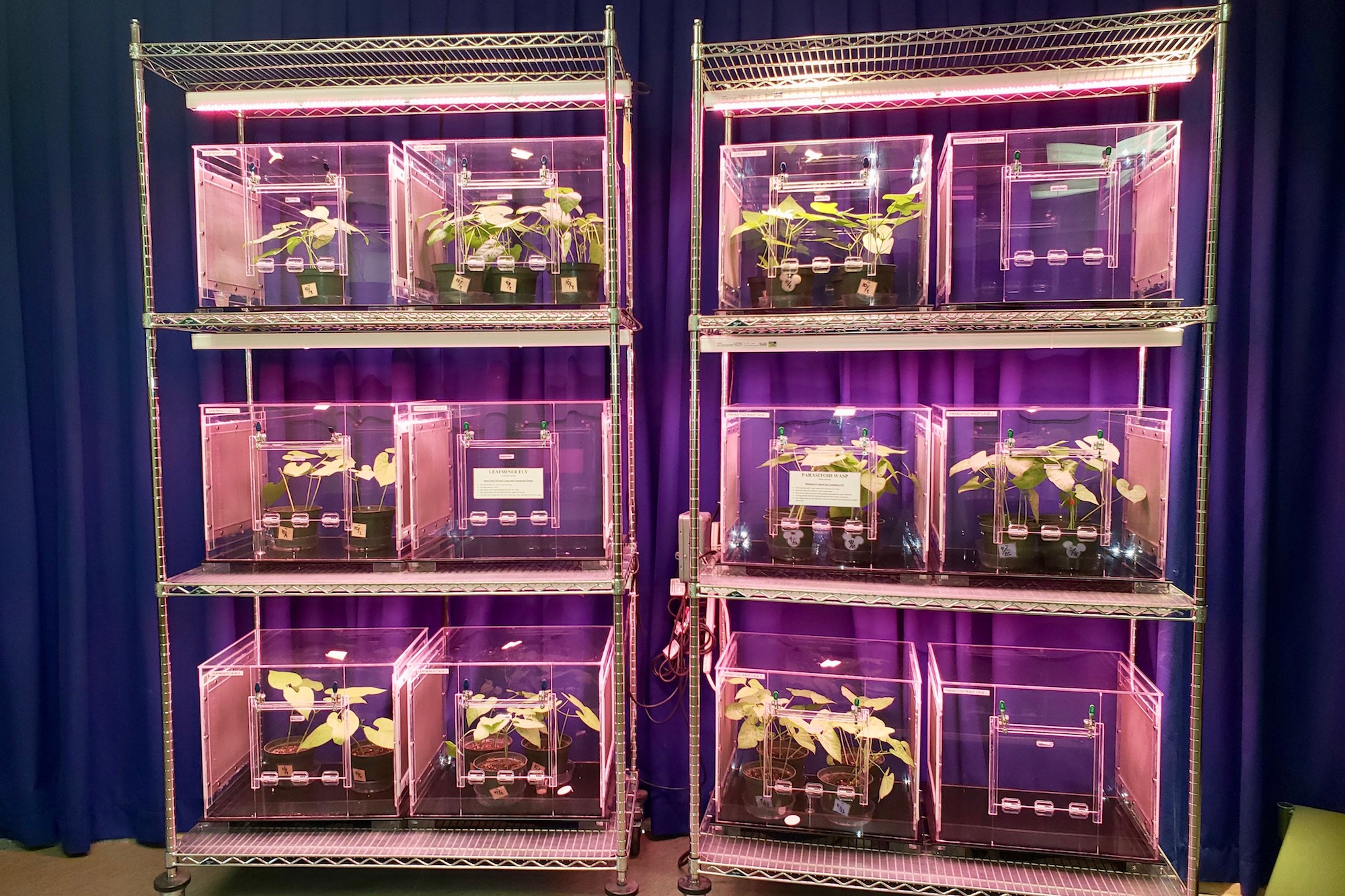 Some of the research Scott is helping with is on parasitoid wasps.

Epcot’s research focuses on how a certain wasp – aka opius dissitus – might make crops hardier against infestation from leaf miner flies.

Leaf miners are an invasive pest that lays eggs directly inside the leaves of such plants as celery, tomatoes, potatoes and beans. The larvae damage the plants by burrowing through the leaves. Predators and pesticides have a hard time getting to the larvae because they’re inside the leaf.

Here’s the weird science part: The wasps have the ability to find leaf miner larvae and lay eggs inside them, which eventually kills the leaf miner. That disruption to the leaf miner life cycle can prevent crop infestations.

The University of Florida lists the wasps as a potential biological control of leaf miners and cites the leaf miner research at Epcot. 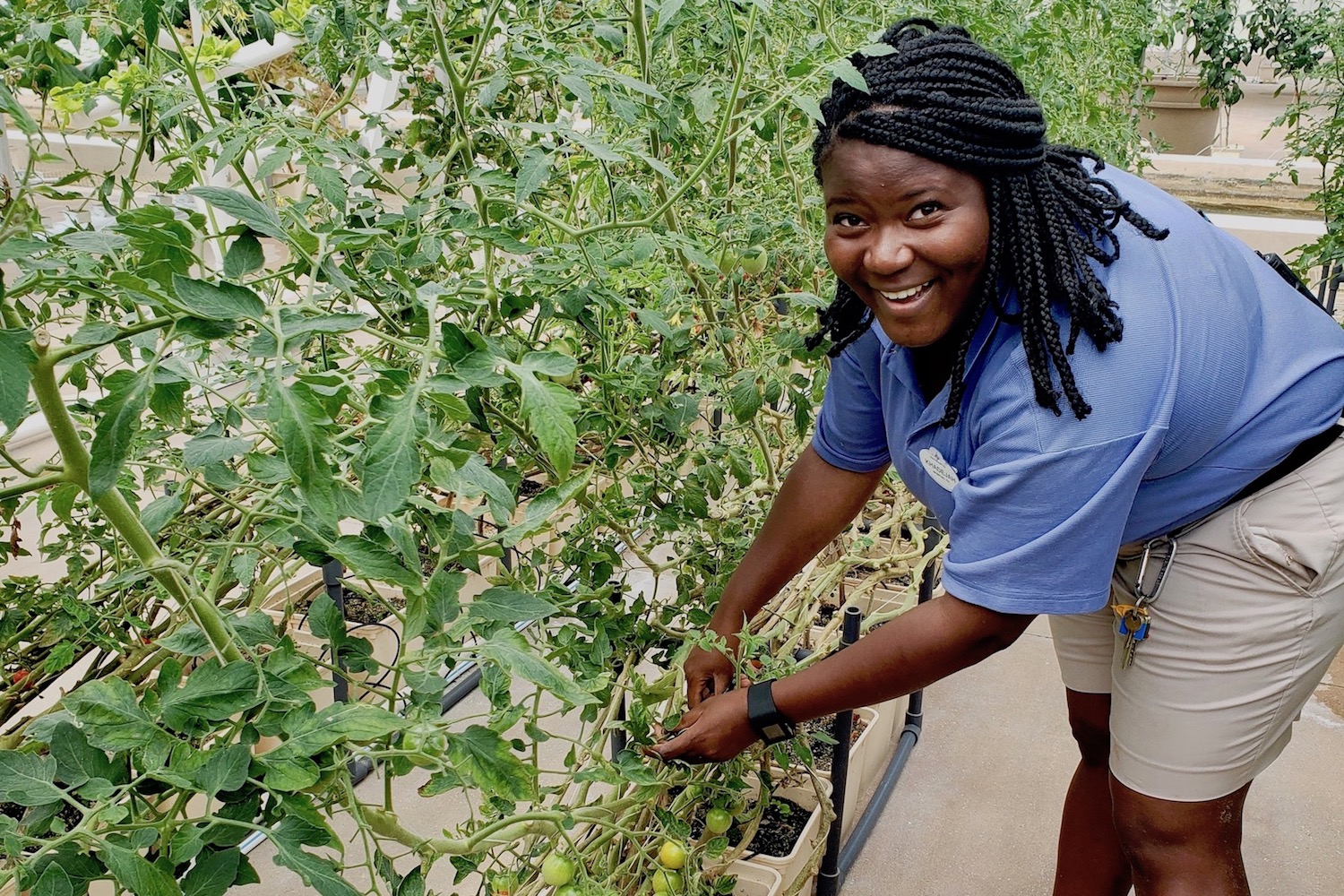 Scott is working in the greenhouses at The Land Pavilion.

Scott traveled to Walt Disney World with her family during spring break in 2015.

“The trip was absolutely amazing and definitely made its way in the top 10 memories of my life,” she said. “We visited Epcot, and it changed my life. I remember being overwhelmed with happiness, so much to the point where I thought, ‘I have to work here one day.’”

Since that trip, she periodically looked for Disney World job postings. The third year was the charm, she said.

“I am so fortunate to be working here and have had an amazing time.” 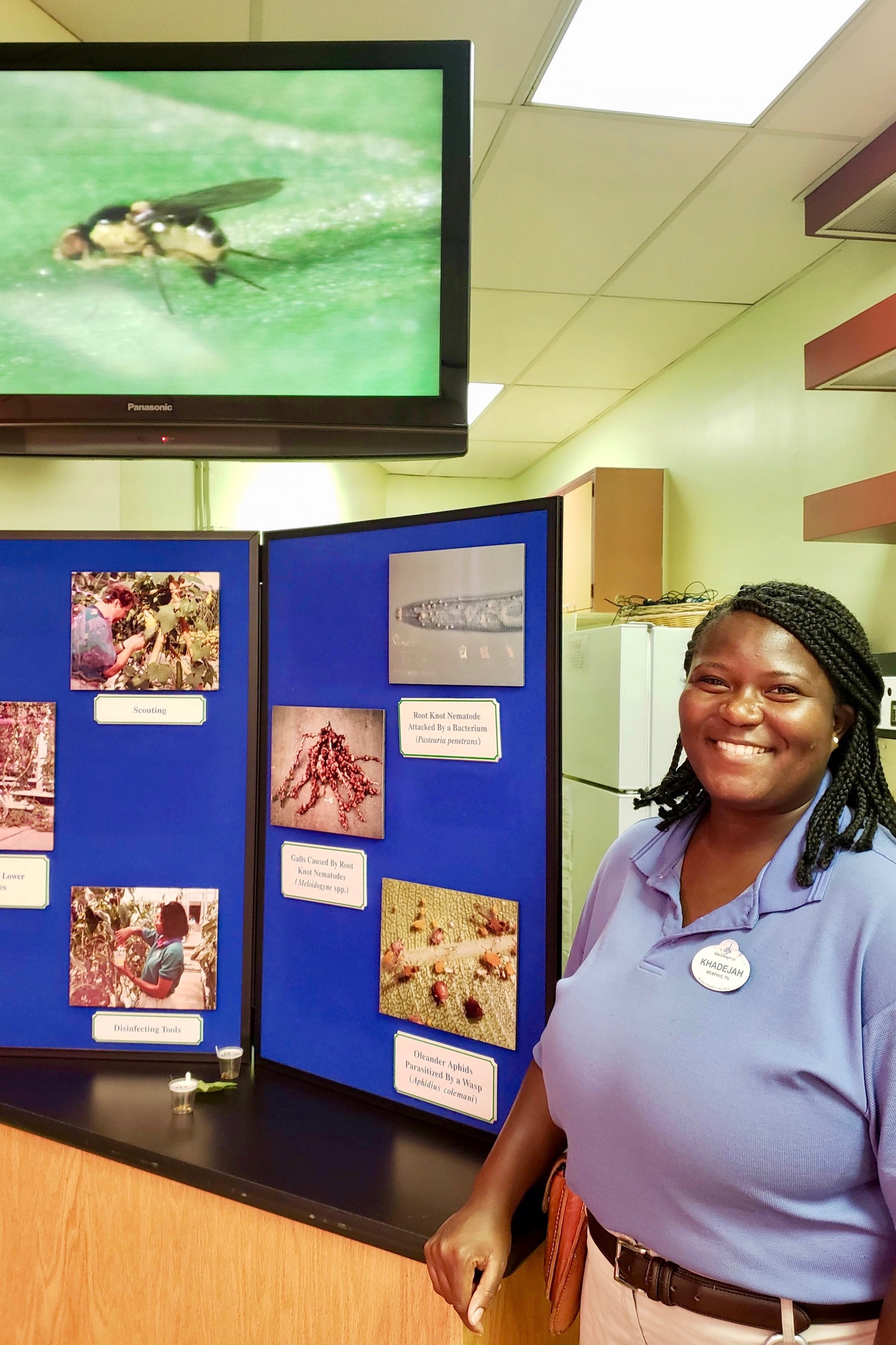 Scott stands with a display about the wasps she works with.

Scott, who graduated this spring from APSU with a Bachelor of Science in agriculture, went through three rounds of interviews before landing the Epcot internship.

She credits APSU and the mentorship of Dr. Donald Sudbrink, chair of the University’s Department of Agriculture, for her success.

“He’s been with me since I got here, mentoring me, teaching me,” Scott said.

The Memphis native discovered she wanted to attend APSU when she was in elementary school, while she was with her sister touring colleges. Although her sister picked another school, APSU stuck with Scott.

“I had really fond memories of Einstein’s (Einstein Bros. Bagels),” Scott said. “I just remember having coffee with my sister and my parents.”

She kept fond memories of APSU through college, and now she shows full Gov pride at Epcot, where her name tag even has the University’s name.

“I love rocking my Austin Peay gear, even here,” she said. “I’m always trying to get the conversation started about Austin Peay.” 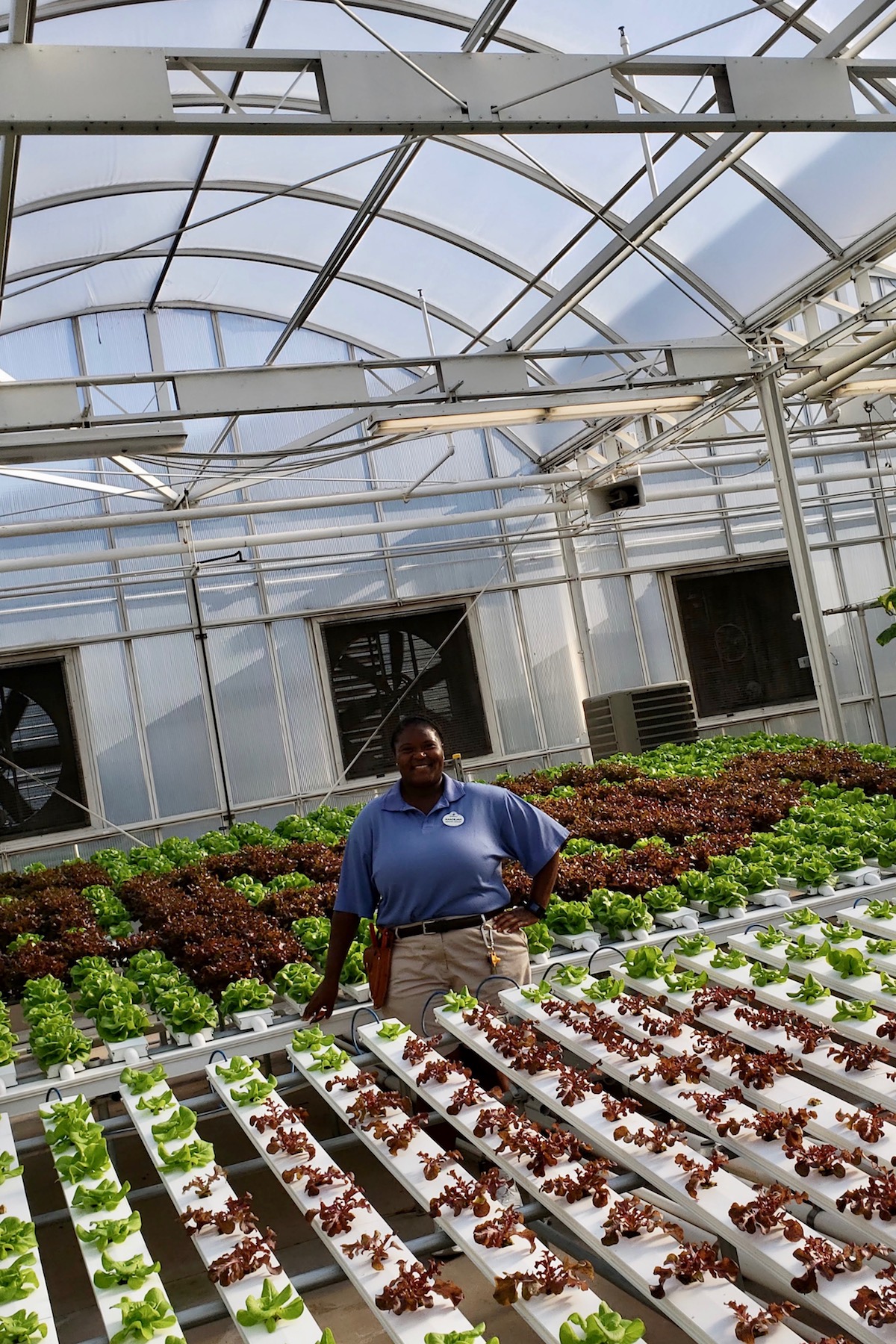 Scott stands in one of the gardens.

Scott has a unique position at Epcot because she works in all the greenhouses. She described each this way (these are just a few of the details):