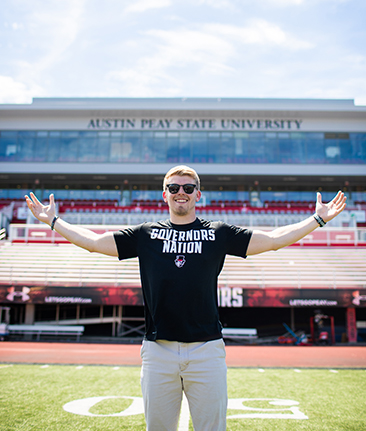 “As an Admissions counselor, one of our biggest jobs is to tell students about APSU and everything it has to offer. Getting the chance to help them explore their options and for some to call APSU their future home is what I look forward to most.” Trey on what he enjoys about his interactions with students

I am from the Memphis-area, I went to Arlington High School and played football where my senior class became the first class at AHS to ever win a playoff game. I then came to APSU in the fall of 2012 and I have called Clarksville home ever since. As an undergraduate student, I was in a fraternity where I held numerous positions and I also worked for the Office of Admissions as a R.O.W. leader for 3 years which eventually led me to this position full-time. I also coach football and have coached in the Clarksville area for the last 5 years.