Home » Health and Counseling » suicide prevention
In this section

Suicide is the second leading cause of death for college students. As an institution, we must understand that preventing suicide involves a community working together. In accordance with House Bill 1354, Austin Peay State University has developed a suicide prevention plan and an associated protocol that deploys a variety of initiatives to improve student health and wellbeing and to prevent suicide. The plan has three major components: Suicide Prevention, Suicide Intervention, and Suicide Postvention. 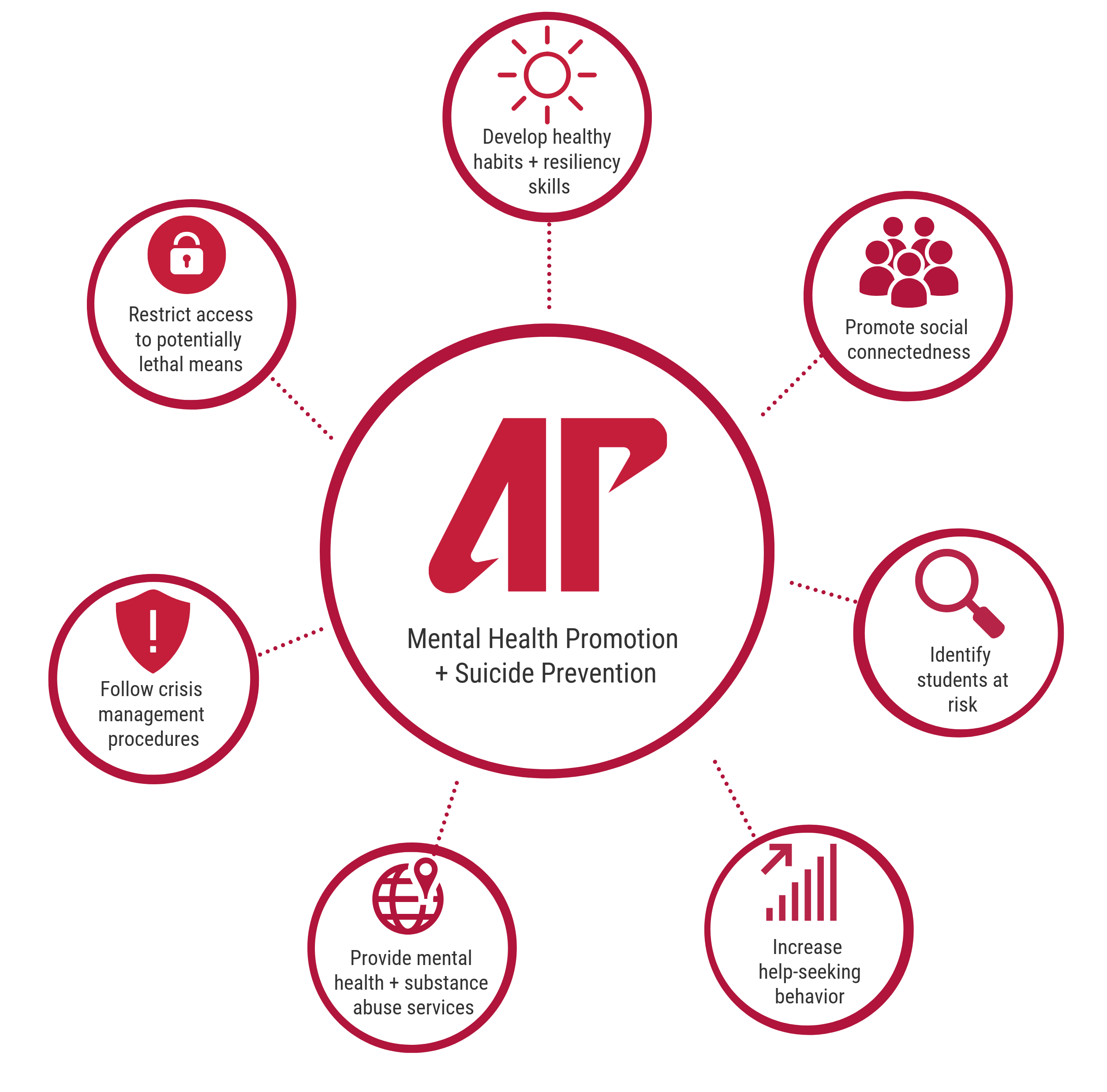 Training: Austin Peay State University will provide annual suicide prevention training to faculty, staff, and students. Gatekeeper training will be offered by an on-campus team of certified QPR trainers and can be scheduled through the completion of the following outreach form: (Still under development). Additional trainings will be provided at select FYE courses, Govs Row, Student Leadership/ Work Orientation, etc. APSU QPR trainers are certified via relationships with the QPR institute and Tennessee Suicide Prevention Network.

Dissemination of Information: Austin Peay State University will promote available resources related to suicide prevention services to include, but not be limited to, its partnership relationships, campus resources, the National Suicide Prevention Lifeline, Crisis Text Line, and The Jason Foundation ‘A Friend Asks’ app on the APSU website, in addition to additional campus media and training formats.

Dissemination of Plan: Austin Peay State University will disseminate a link to the plan, each academic term via appropriate and effective channels of communication to faculty, staff and students, e.g. email, social media, handbook, etc. The APSU Mental Health and Wellness Committee will be responsible to disseminate the plan and record each dissemination.

Student Involvement: Austin Peay State University will grow student involvement and participation through the development of student peer educators and/or peer advocates responsible for distribution of educational materials and programming related to suicide prevention and mental health promotion. Peer advocates will be developed in partnerships with campus groups.

More information regarding partnerships between Austin Peay State University and the local community is available at https://mcgtn.org/health. That Montgomery County Health Department will have available a comprehensive list of partners and services available to members of the APSU community which may include crisis referral services, support groups, military services, recovery center, etc. “Public Health Directory” and can be found on their home screen and was developed in partnership with the Montgomery County Health Council.

Possible Next Steps: the suicide prevention task force would like to initiate discussions about the possibility of partnering with Academic Affairs to encourage faculty to add mental health messages to course syllabi. In particular, we expect to reach out to faculty representatives with this idea.

Question, Persuade, Refer: QPR is Austin Peay State University’s preferred model of gatekeeper training, by which faculty, students, and staff can learn to recognize suicide risk and respond appropriately. The QPR mission is to reduce suicidal behaviors and save lives by providing innovative, practical and proven suicide prevention training. The signs of crisis are all around us. In recognition of this important initiative, this year we increased the number of certified QPR trainers serving our campus by 400%, going from one trainer to five. Key components covered in QPR training include the following:

Behavioral Intervention Team (BIT)/Care Team: Austin Peay State University’s BIT/Care Team encourages faculty, staff, and students to communicate about and facilitate supportive responses to students of concern. Whenever students of concern and their situations are brought to the attention of the team, BIT/Care Team members meet to gather data and plan for a coordinated response. The ultimate goal is to provide students of concern with assistance, to mitigate risk, or both. The team’s ultimate goal is to help keep the APSU community healthy and safe through early, appropriate intervention and to promote a safe environment focused on student learning and success. The campus community will be educated on an ongoing basis regarding the team and how to respond to students of concern.

Notifying the BIT/Care Team: any faculty, staff, or student may notify the BIT/Care Team of their concern about a particular student. Hyperlinks to the (anonymous) BIT/Care Team Student of Concern form can be found on OneStop or on the Student Conduct and Case Management website here.

Student Counseling Services: suicide intervention is a key component of Student Counseling Services operations. During normal business hours, staff are available to consult with faculty, staff, and students on a variety of topics, including how to intervene with students in crisis situations. Under optimal conditions, individuals (i.e., faculty, staff, or students) with a good working relationship with a student of concern will directly discuss their concerns with the student and seek additional professional/medical as needed. Similarly, anyone may contact Student Counseling Services to speak with a licensed mental health professional regarding concerns about a student. Generally speaking, students’ concerns are sorted (triaged) according to a series steps, which are outlined below. After business hours, on-call counselors are available through Campus Police (x 7786) if a mental health safety assessment is deemed necessary.

After-hours emergencies: when a student is in an apparent mental health crisis after business hours, Campus Police (x 7786) is the first point of contact. Campus Police will notify the on-call counselor when they deem it necessary to assess a student’s risk for suicide. Once contacted, the on-call counselor will assess any situation over the phone, speak with both the initiating officer and the student, and determine whether or not it is necessary to come to campus to resolve the crisis. If the provider can handle the situation with the student over the phone, then he/she will attempt to do so and explain the resolution of the situation to the police officer on scene. If the on-call counselor deems it necessary to come to campus to resolve the crisis, then the provider will check in with the officer on scene before interviewing the student. These interviews are not “after hours counseling” but opportunities for a licensed mental health professional to evaluate the student’s safety and recommend appropriate next steps. A follow-up counseling session in the Health and Counseling Center is ordinarily scheduled for the next business day. The following diagram outlines mental health crisis response procedures. 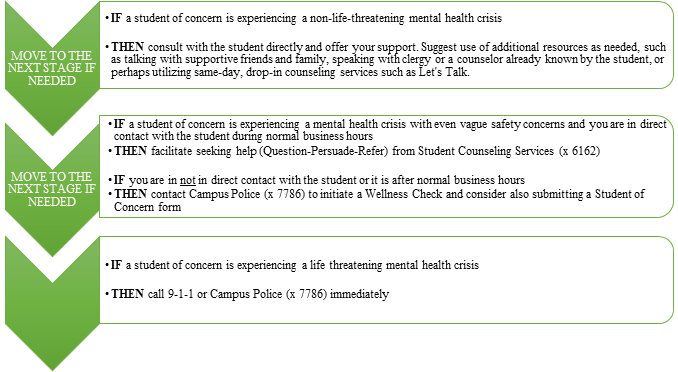 Notification: once a death by suicide has been verified, it is important to quickly mobilize and organize internal and external resources. Austin Peay State University’s Dean of Students uses an extensive notification checklist to ensure affected members of the community are properly notified and supported as needed.

Support: close friends, fellow team or club members, colleagues on the same work team or neighbors in the community may have a particularly hard time and need extra support for a period of time. Those who need support might also include a colleague who recently argued with the deceased or a romantic partner who initiated a breakup. Suicide is never the result of one thing, but rather the convergence of multiple factors.

Psychoeducation: because we know there is a possibility of copycat deaths or contagion, especially following a suicide death among adolescents or young adults, we believe that postvention efforts must include screening members from the community for depression and/or suicidal risk. This imperative is bolstered by the 2007 National Youth Risk Behavior Survey (CDC, 2008) findings indicating that 28% of students met screening indicators for depression, and 14.5% seriously considered suicide. Additionally, case finding is consistent with a public health approach to preventing an illness, and so the Department of Student Wellness and Prevention takes the lead on this.

Resources: an important part of responding to any potentially traumatic event is linking individuals and groups to resources for continued, local support as needed. Provide individuals, family members, and the university with a list of local mental health resources, including contract information for emergency metal health assessment. As noted above, when multiple suicide deaths occur in a given locale, a crucial part of the response includes ensuring that the local community professionals are collaborating with a single vision and plan.

Evaluation: leaders involved in the postvention devote periods for review and solicitation of feedback from all constituents, with the results of the feedback being built into the suicide prevention plan. Along these lines, the Chair of the Student Wellness Steering Committee will solicit feedback from all involved in the prevention, intervention, and postvention process: students, workers, those involved with implementing the plan, as well as management and local officials, if appropriate. The Chair will use these findings to improve any organizational and/or community structures related to suicide prevention, intervention, and/or postvention.